Skip to content
You are here
Home > People Profiles > Science, finding life ‘out there’ and Pinot Noir 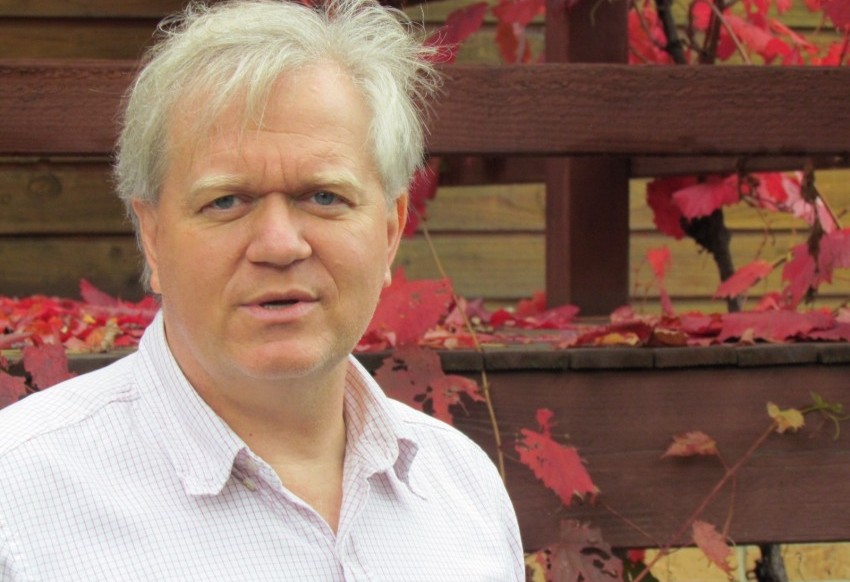 With kangaroos grazing and boxing on a nearby hillside  and a wedge-tailed eagle cruising overhead,  astrophysicist and winemaker Brian Schmidt expands on mapping the southern skies and life out there, the state of science in Australia and how his Nobel Prize catapulted his well-regarded Pinot Noirs to ‘must have’ status.

The Bulletin is visiting the ANU School of Astronomy and Astrophysics professor at the family property off the Sutton Road. His wife, economist Jenny Gordon, has taken her horses out to an event and the two sons are elsewhere. Schmidt makes us a tasty coffee and we settle in for a chat.

The Nobel Prize was for being part of the team which established, through observation of distant supernovae, that the universe is expanding at an accelerating rate.

The ANU School of Astronomy and Astrophysics is currently mapping the southern sky – with three passes of Skymapper already completed and five more passes ahead. Dealing with the enormous mass of accumulated data will be the big challenge, says Schmidt.

But already the ANU team has published a Nature paper about discovering an example of the most primitive star in the universe.” Wow”, I say, “how did you know that?”

“The universe was created in a Big Bang 13.8 billion years ago and that Big Bang made hydrogen, helium and tiny amounts of lithium and not much else. So this star we looked at is the first star we discovered that has hydrogen and helium and no iron in it at all. Iron is made by supernovae, the things I study,” says Schmidt. [Supernovae events happened a bit later in the evolution of galaxies.]

Astronomers can detect iron or helium because every atom has a fingerprint, atomic lines that absorb or emit colour. Those differences can be identified by Skymapper imaging.  More exciting results are expected.

Life out there: who knew there are many ‘habitable zones’ in our galaxy?

Schmidt was on ABC Q and A recently explaining the amazing news about habitable planets or zones which, it turns out, are not so rare at all.  ANU’s Siding Springs observatory with Skymapper telescope at Coonabarabran will be scanning our skies and hundreds of thousands of stars for the next decade seeking likely planets and zones.

The plan then is for the next generation of “really giant” telescopes, like one being built in Chile right now (with Australia part of the project) to swing into action. These should be able to pick up chemical fingerprints of what is in the atmosphere of planets surrounding stars.

The question is how frequent are life-bearing planets with specific chemical fingerprints like oxygen, which is only there due to life. Some answers are only 10 years away.

While we might be gawking, Schmidt says matter-of-factly, “So far it appears one in five stars appears to have an earth like planet in the habitable zone.”   And that’s just in our galaxy.  But, he says, astronomers presume that most galaxies would not be that different.

Catching up with science fiction, Schmidt agrees there will presumably be a whole range of “life out there.”

We could go on all day about the stars and the universe but Schmidt also plays an important role in Australia now as a public intellectual speaking out for more beneficial science policy. Why is he doing it?

“Science needs to have a voice. It’s easily ignored and getting a Nobel Prize, one of the things that happens is you have the ability to speak out and be an advocate.” Doors open, politicians and captains of industry are available for a chat.

A couple of days after our talk, Schmidt was off again to a global sustainability conference about cities and climate change in Hong Kong. Talking about climate change “to anyone who will listen” was high on his agenda.

He says he sees his role as ensuring the country benefits from the science that is done.  Isn’t it now?

Not enough, says Schmidt. The problem is there is no strategy with how Australia looks at science. And it’s not one major political party worse than another.

“It’s always an afterthought. The longest strategy is maybe five years. You get a big sugar hit of funding and then it just fades away. Often funding is not renewed until the end of an organisation’s budget. That leads to panic and job insecurity.”

He says Australia is “profoundly bad” on science vision and strategy compared to Europe, the US, Japan or China, with Canada and New Zealand also not great.

“The money we do spend on science doesn’t achieve the benefits for Australia it could. Scientists are spending too much time managing uncertainty and there is no plan for later on so the benefits of investment are often not realised.”

“Its like going out and buying a sports car but not being about to fill it up with petrol because you don’t have the money after the first year and it has to be in the garage for the next three years until you get that next money hit.”

Schmidt agrees there must be financial accountability and contest for funding but it should take only a small fraction of a science organisation’s time rather than vice versa as currently.

There was a major panic just a few months ago, when Education Minister Christopher Pyne hitched recurrent funding for science infrastructure – like telescopes, cutting-edge imaging technology or the marine observation systems that allows the search for Malaysia Airlines flight MH370 – to the Senate passing his higher education ‘reforms’.

Schmidt says he spent a lot of time in the halls of Parliament House to help stave off this disaster to programs and jobs, for now.  In fairness he notes that under the previous Labor government the program, started under the Howard government, was already subjected to a ‘band-aid’ approach and funding stress.

Despite recent deep staff cuts and turmoil, Australia’s premier science organisation CSIRO has traditionally and still has relatively stable funding. But Schmidt thinks its mission to benefit the country has become “blurred”. Perhaps the new chief executive will clarify it.

Strategic research and development on behalf of the nation should remain the mission of CSIRO, but it too has been obliged to chase money for its own operations, which has possibly overtaken other priorities.

He gives the example of Wi-Fi, a discovery which came out of astronomy and has made a lot of royalties for CSIRO. “But Australian companies have seen surprisingly little of that return.”

The past performance of CSIRO and where it is headed in relationship to universities and industry is a complicated discussion – including the willingness of Australian companies to invest in and commercialise new discoveries when they are on offer, which has not always been there. We move on.

Schmidt uses his public status to remind policy-makers and the public of the risks of climate change, although he is more ambivalent about the call to keep fossil fuels, including coal seam gas, in the ground to minimise risk of increasingly more catastrophic weather. In his view the country needs all options for the time being.

How about climate change seen from his perspective as a self-taught wine maker? (He took a vintage course with one of the established local wineries, then read up on all the chemistry and proceeded through trial and error to a highly regarded wine). “It’s like making artisan bread.”

“The industry across the board sees some pretty big changes coming,” he nods. The elevated slopes where he grows the grapes and makes Pinot Noir under the Maipenrai label, would become suitable for Shiraz or Cabernet Frank but not Pinot if warming continues.

That sounds OK until you consider the cost of infrastructure changes that will be required. Also the exact weather patterns ahead are unknown and could be a killer. Grapes don’t like it either too hot or too cold.

This year the cooler, wetter summer has been one of the best for Pinot, he says. “But if we get an El Niño next year, watch out!”

The whole family helps out with the vineyard chores and the very successful wine mail order business attached. There is some Maipenrai wine available at Plonk in Fyshwick and diners can taste it at Grazing in Gundaroo, and Chairman and Yip and Aubergine in Canberra.

Oh yes, and the effects of that Nobel Prize? “We went from taking all year to sell our wine, to selling out in 24 hours!”