Next month the NSW Government will start to make good its controversial political trade off: recreational shooting in national parks in return for the Shooters’ Party’s two votes in the Upper House to sell off more electricity assets

Graham Scully on behalf of the Kosciuszko Huts Association (and Graham is a local resident too) says this cynical deal is highly risky to humans and native wildlife and deeply incompatible with the values behind the creation of national parks. Many of the parks in Palerang’s and Queanbeyan’s immediate vicinity will be affected.

Seventy-nine national parks, nature reserves and conservation areas have been selected for so-called “conservation shooting” by amateur shooters.  In the Southeast, affected parks include Southeast Forests (inland from Merimbula), Tallaganda (between Queanbeyan and Braidwood), Wadbilliga (west of Cobargo), Morton (east of Braidwood) and Kosciuszko.

National parks were established to protect the native flora and fauna, and are also there so that Australians and overseas visitors can enjoy these lovely places and learn about our unique environment, heritage and culture.

Up to now, they have been places where people go seeking peace and tranquillity, where families, young people from Scouting, Duke of Edinburgh Scheme and Outward Bound go in safety to experience and learn about our wonderful Australian bush.

There are over 50 historic huts and homesteads in Kosciuszko National Park, visited and loved by people of all ages from all walks of life.

The Kosciuszko Huts Association (KHA) has been caring for these huts and homesteads for over 40 years, as well as recording histories.  We have over 550 members from all states and with members of affiliated clubs and organisations our reach is around 2,000 individuals.

The KHA is appalled at the prospect of amateur shooters being handed access to Kosciuszko National Park, the largest and most popular park in NSW. From 1 March every visitor will be asking “will I come across a shooter?”

They will dread the day when they arrive at a hut after a day’s walk to find a group of camouflaged men in possession of lethal weapons. Total visitor numbers to the area are likely to fall with impacts on many local businesses.

We fear the consequences for the rights of visitors, especially their right to safety. The risk assessment by National Parks and Wildlife Service in December warned of a “major risk” that bushwalkers, park staff, Snowy Hydro personnel and search and rescue volunteers could be killed or seriously injured.

The New Zealand experience is that over the past ten years nine people have been shot and killed in national parks, three in 2012. The latest fatality was in July 2012 when a shooter mistook the orange beanie of his mate for “fur” and at 16 metres, shot and killed him.

No confidence in Game Council

Kosciuszko Huts Association has no confidence in the Game Council, the body tasked with supervising the “conservation shooting” program. The Sydney media reported in mid-January that a top Game Council official was suspended in relation to a police investigation over allegations arising from an incident in western NSW.

According to the Sydney media report, this involved a Game Council vehicle allegedly breaking a fence and entering a privately-owned cattle station from a reserve in pursuit of a male goat with ”trophy horns” and a hunter then gut-shooting the animal. We will follow this investigation with interest.

The Game Council also supports the Australian Bowhunters Association who we believe is lobbying for the right to bowhunt in national parks. Search ‘bowhunting NSW’ for links to this ‘sport’ and its activities.

We earnestly hope that the NSW Coalition Government acts to repeal the amendments to the Game and Feral Animal Control Act 2002, passed on 27 June 2012, which allow shooting in NSW national parks and other reserves.

For further details visit the website of the National Parks Association (NSW) www.npansw.org.au and the Invasive Species Council www.invasives.org.au 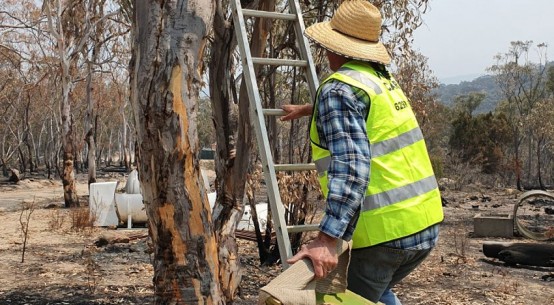