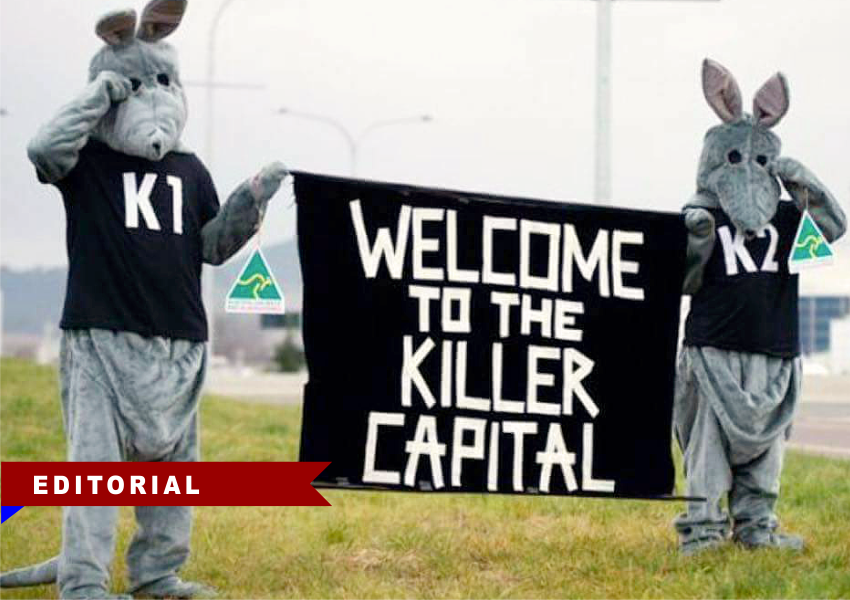 RECENTLY, I ASKED a Canberra resident, who is a kind woman, what she thought of the ACT’s annual kangaroo culling activity. She made a face, but then said, ‘I know there are too many of them but’…

The ‘too many’ narrative indeed goes to the heart of the government propaganda that accompanies Canberra’s now annual killings on the nature reserves managed by Parks and Conservation. But here’s the thing, this assertion can only be a value judgement, because the ACT has no evidence to back up these claims. Many people assume the dead bodies on the side of the road provide the evidence. But they are more likely an indicator of young and inexperienced animals dispersing as is normal mob behaviour and lacking any wildlife corridors.

In 2018 it’s the same story – pseudo-scientific about conducting a “conservation cull” and “saving biodiversity”. However in late 2017 I  documented (through a freedom of information request) three things:

The three findings came from a 2014 independent CSIRO review commissioned by the ACT government, and then seemingly ignored along with the suggestions to include other variables (like the effects of weather or development/habitat loss) as good science dictates    So without any evidence of benefit from the cull,  the ACT Labor/Green government has resumed for the 9th year its war on Canberra’s Bush Capital wildlife.

The target is the kangaroos that delight tourists and many residents  but apparently offend some people, possibly the car insurance industry and Daniel Iglesias, the ACT Parks and Conservation Service director who has directed this operation over the years.

The politicians and managing bureaucrats, not unlike the Commonwealth Bank or AMP boards we’ve just heard about, have so far been deaf to all citizen complaints and contrary evidence and indulged their staff’s worst strategies.

The government’s hired guns will aim to destroy 3,500 kangaroos – which are not bloodless units, but families and familiar groups – as anyone with a passing acquaintance with the animals can tell you. The shooters are reportedly armed with silencers so the good people of Canberra can sleep soundly while their wildlife is being slaughtered and not worry about the chance of a stray bullet hitting them from the neighbouring ‘nature reserve’.

If you want know which reserves will be species-cleaned, the Canberra Times has a list here.

The reality you can still see

Recently we walked in the Burra nature reserve behind the Googong reservoir and remarked on how nice it was to see some kangaroo mobs in their natural setting – ie not just hiding out in rural residential areas, or on the Queanbeyan golf course. Well not for long, if the ACT parks director and his guns have their way for a few more years.

The Googong reserves will be as devoid of wildlife that people actually see, as are all the much-shot Canberra nature parks. Thank goodness the NSW Office of Environment and Heritage in Queanbeyan has felt no impulse to kill on its land bordering the ACT. In the past, Queanbeyan has produced research that contradicts ACT claims, ie that kangaroos are somehow a danger to endangered species like the Earless Dragon and several others.  On the contrary, the NSW parks staff indicated that they understood how kangaroos are part of the ecosystem and can be left alone. It was discussed that managers might better direct their energies to weed management.

Creating orphans that jump in front of cars

On our rural residential block we are currently playing host to two doe kangaroos and their almost-weaned juniors on a home range near the house. In this autumn dry period, we share with them a little supplementary hay and observe.

For instance, we see that six-month-old joeys are still drinking from mum or trying. They follow mum everywhere and will for some months yet. “When alarmed the young at foot relies on its mother to lead it out of danger”, says an authoritative work (Zoologist Terence Dawson, Kangaroos  2012) who can also be consulted for weaning facts.

There are a lot of kangaroos in our woodland and on small holdings in my district, (unlike further out on the grazing land where they are often shot), and most people appreciate their wildlife.

It’s clear that right now there are a lot of semi-weaned young kangaroos around and  if people in their cars are having close encounters, it’s likely that it’s with one of these uneducated young roos, particularly if they are panicked and alone. 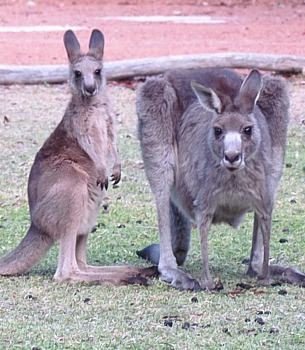 So what the ACT cull at this time of year does, is overnight create a small army of orphaned kangaroo youngsters. People who annually bear witness to the slaughter have written about seeing the forlorn lines of suddenly motherless joeys lining the streets near where the mums were shot.

Not only are these joeys now at greater risk of death in the coming winter months from starvation, disease and predation, but they are the ones likely to immediately cause more car accidents on ACT streets.

So good work ACT government. There will be more complaints. You have created not only a vicious program but a vicious cycle until finally this Australia icon will be gone from your midst for good.

The attitude on display in the national capital government is unfortunately not an outlier. Governments throughout Australia have long arrayed themselves as enablers and lobbyists for killing the kangaroo, either as a pest to please pastoralists or, as frequently, through a commercial slaughter called the world’s largest. Here is an open letter from 24 well-known animal welfare groups saying it’s time to stop the killing and setting the facts straight on a few things.

The Humane Society International is one of these organisations. They have started a campaign to petition Coles and Woolies not to stock kangaroo meat.

THE BULLETIN  IS developing a special features section with long form articles – posted on the Home page sidebar. Coincidentally, the first of these, Roogate, tells the whole unvarnished story about the ACT’s war on kangaroos as seen by Sydney academic David Brooks. It unpacks the weak or irrelevant science that has been the government’s ‘evidence’ for its killing sprees.

Just posted is a piece I pulled together from various analysts since the US election called: Trump, Brexit – have we heard the lessons?

This explores the legacy of the globalised, neo-liberal political economy we have inhabited for 30 years and its significant impacts on the Donald Trump election and before that Brexit. It’s a good time to ask whether we in Australia, with a similar political economy have learned any lessons. And what those lessons might be.

What went wrong there for the status quo and the ‘of course’ economic narratives of recent decades?

At state and federal levels, Australia is not immune to the ideas and pressures that have beset the US and the UK. Far from it. We’ve been experiencing years of privatisation and public asset stripping and attacks on the public interest sector.

Since April 2018, the banking royal commission has shone a light on one corner of our version of Wall Street. It’s not a pretty picture of greed and corruption and mismanagement. Meanwhile, the same old politicians promise another free trade agreement with the same old winners and losers.

The working and middle class is beset by industrial closures, efficiency drives and ‘creative destruction’ with new technology. The 1980s compact between employers and workers is under daily political threat as unaffordable. The list of warning signs for ‘business as usual’ goes on.

These have all been drivers leading to Trump and Brexit. We in Australia really didn’t hear much about it at the time. So here it is with a few facts that may come as a surprise.

One thought on “State terrorism”