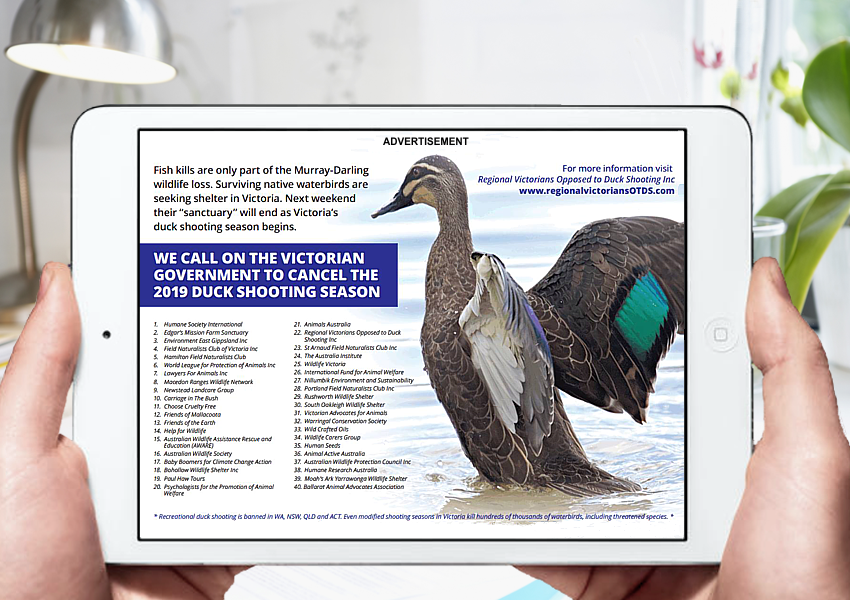 HUMANE SOCIETY INTERNATIONAL is sounding the alarm for Australian waterbirds, ducks in particular, who survived the water loss and habitat destruction of the lower Darling River by seeking shelter in Victoria, only to be blasted out of the sky as of mid-March when the duck season in that state and in neighbouring South Australia starts up.

The society explained in a media release:

Despite Premier Daniel Andrews stating “there is no place for animal cruelty in Victoria” just last Thursday, the slaughter of hundreds of thousands of waterbirds is beginning in Victoria.

25,000 shooters will open fire during the state’s duck hunting season, with calls for the season’s suspension due to low waterbird numbers so far going ignored.

In addition to concerns about population levels following prolonged drought, Humane Society International (HSI) is urging the Andrews Government to cancel the season due to serious animal welfare implications.

“While many people are aware of Victoria’s duck shooting season, few realise the horrific scale of the suffering. Over the last 10 years in Victoria an average of 387,0001 ducks have felt the spray of a shotgun each season,” said Evan Quartermain, HSI’s Head of Programs.

The Victorian Game Management Authority has shortened the 2019 season to nine weeks (from 12); slightly reduced bag limits; and banned hunting of the Blue-winged Shoveler. However, these changes will likely have little effect on the total number of birds killed.

“The restrictions placed on this season don’t go nearly far enough. Blue-winged Shovelers only make up 0.5% of birds shot and hunters have exceeded the bag limits set this year in just two of the last ten seasons. Similar rules were in place in 2010 when more than 270,000 birds were reported killed.

“When celebrating the bust of a wildlife smuggling ring, Premier Andrews said ‘there’s no place for animal cruelty in Victoria’. To be true to his word the Premier must immediately suspend the duck hunting season,” Mr Quartermain continued.

As reported in The Guardian, the 2018 Aerial Survey of Wetland Birds in Eastern Australia showed long-term declines in the numbers of key game duck species, including the Wood Duck, Pacific Black Duck, Chestnut Teal and Grey Teal. The survey, which has been running since 1983, showed that overall waterbird numbers were approaching the low of the millennium drought, when Victoria suspended its duck hunting season from 2007 to 2008.

“Even birds that manage to escape across the South Australian border won’t be safe, with their hunting season that allows eight ducks a day to be shot per hunter beginning on the same day. To subject struggling waterbird populations to this level of unnecessary and cruel pressure is environmental recklessness in the extreme,” Mr Quartermain concluded.

HSI was one of more than 40 organisations urging the Andrews Government to halt the duck shooting season in a half page advertisement that ran in The Sunday Age on the 10th of March (main image above). Organised by Regional Victorians Opposed to Duck Shooting Inc., the alliance spans wildlife, environmental, conservation, animal welfare, rural tourism, community and legal sectors. 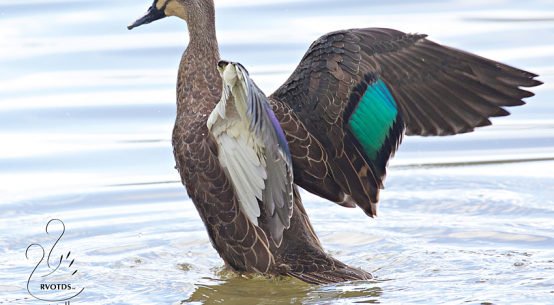 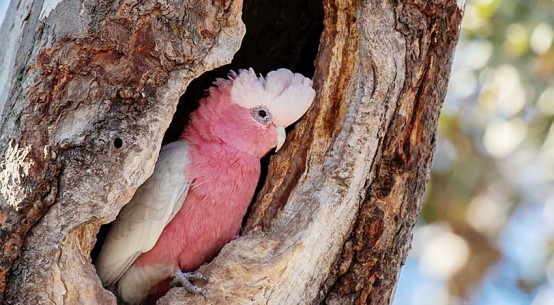 Like other Australian Wildlife: birdlife is in deep trouble