Excellent letter in the Canberra Times responding ACT Government’s irresponsible comments if you accidentally hit an animal on the road:

IT IS CONTEMPTIBLE of Daniel Iglesias to use the reckless actions of two motor hoons as an opportunity to plug his equally contemptible annual kangaroos slaughter.

This opportunism occurred after a woman was hit by a car while moving an injured kangaroo off the road. The kangaroo had been struck by the first hoon, who did not bother to stop and help as the ACT Animal Welfare Act requires (section 10 [1] [a] and [b]). The woman was then struck by the second hoon who also failed to stop.

Obviously, aside from being the law, there is a moral imperative for anyone hitting an animal with a car to move the animal off the road, not only to make sure it is not hit again while awaiting help to alleviate its suffering, but also to ensure other cars do not hit it, causing injuries to humans.

If the person who hit the kangaroo does not stop to render assistance, clearly the next person passing who has a shred of compassion will do so, as happened in this case. There are always risks for anyone doing the right thing for animals, but this does not excuse us from doing it. To save human and animal lives at this time of year, it is important to be aware that when the ACT government is shooting thousands of kangaroos on urban reserves, there are very high numbers of kangaroos crossing roads to flee the shooting.

IMAGE: A known wildlife crossing point on the hill between Denley and Birrawa, The District Bulletin, December 2009. 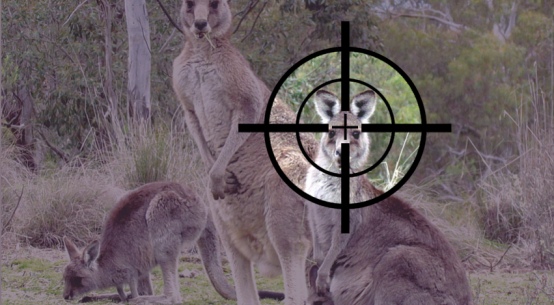 Speak up! They’re counting on YOU