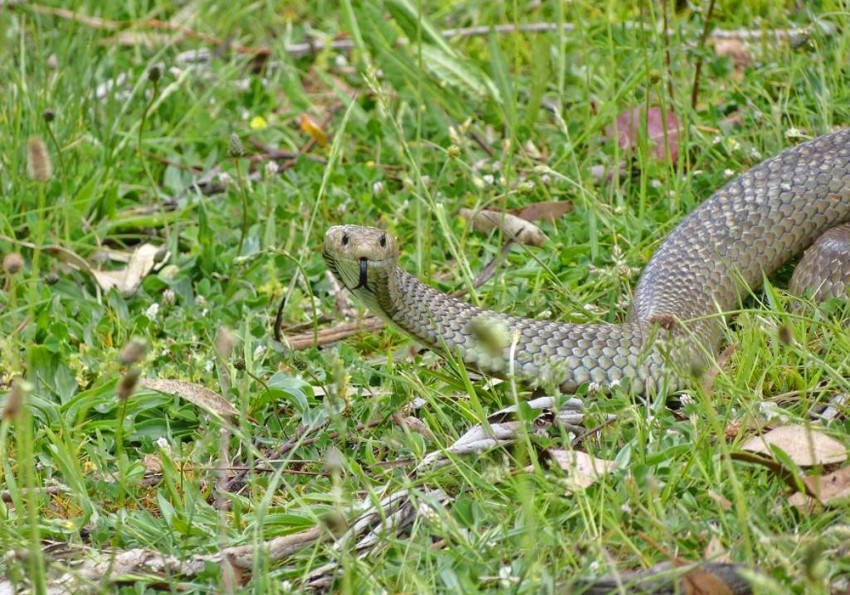 Strawberry at the training course

by Philip Machin, for Wildcare

Wildcare snake handling courses (to be continued next year) provide the opportunity for this month’s column. Wildcare has a large number of trained snake handlers (albeit there is a shortage in the Sutton/Gundaroo area) and the courses are aimed at new recruits who are keen to become snake handlers and there are refreshers for ongoing volunteers.

To run the courses there is a need to get hold of some snakes to train with – typically local tiger, eastern brown and red-bellied black snakes. One such opportunity to capture a snake arose during a recent and not uncommon request for Wildcare help.

As Wayne, Wildcare’s snake coordinator commented, “A lady rang Wildcare on the 6299 1966 helpline to report a brown snake that had been hanging around her kitchen garden for a few days. When I spoke to her, she couldn’t see it anymore, so I advised that, since we were in the process of collecting snakes for the snake handling courses that we run each spring, I would appreciate it if she could call back if she spots it again, hopefully at a time that I could get there before it disappeared again.

“While running the first training course, she called back. And when we broke for lunch, I returned her call and asked if she could still see it. Apparently it was cruising around her strawberry patch, but it was definitely there.

“I left the course venue and went to her place, which was 10 minutes away. She had put a stick in the hole where it normally retreated, and was watching it from a safe distance – absolutely perfect.

“She pointed it out to me and I used my jigger to pull a loop out and gently grab the tail, extricating it from the strawberry plants. I popped it in my snake bag – all done and dusted.

“The property owner was extremely grateful that I could remove the snake safely, and I was impressed that she did exactly what was needed – called Wildcare (6299 1966) and watched it from a safe distance, so I could find and remove it when I got there. ‘Strawberry’ (see photo) was used on the snake handling course that very afternoon and will be released once she has contributed to the training of at least 40 more Wildcare snake handler volunteers.”

There is no need to be fearful of snakes – they are shy animals and would rather keep out of our way. Left alone they will generally move off and not be seen again.

But they can surprise us when we come across them unexpectedly. It is a good idea to get your family to keep the Wildcare number in their mobile phones, so they can readily get help and advice when needed.