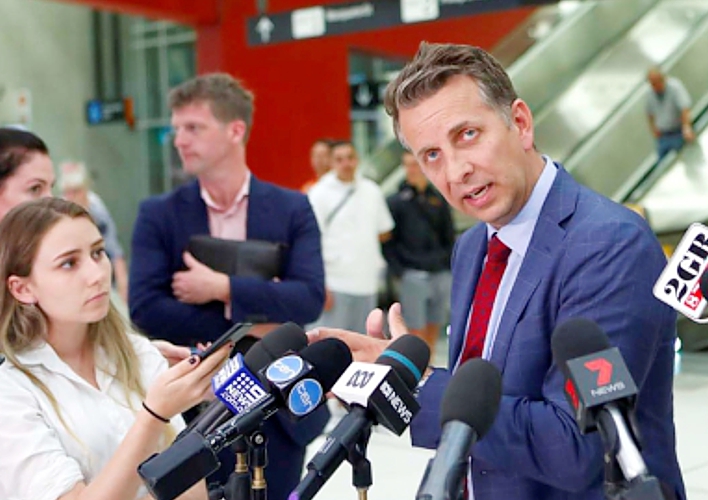 By David Hensher, University of Sydney.

ABOVE: Transport Minister Andrew Constance and the Coalition government are under pressure to fix long-standing problems with Sydney’s train system which have now come to a head. (Daniel Munoz/AAP)

THE WORKING YEAR has not got off to a good start for Sydney trains and the New South Wales government. The rail network went into meltdown with chaos at many stations and trains delayed or cancelled. To add to this woe a 24-hour train driver strike (over pay increases) is planned for January 29, when most of the workforce will be back at work following the Australia Day holiday.

So what caused all of this? We will start with the immediate contributions but recognise that there is a longer story that starts from the inaction of past governments.

The January day of woes started with a major weather event. Lightning struck part of the rail network and closed sections down. Buses and coaches were called in to bypass the closed part of the network.

In addition, significant upgrade work at a major junction, Hornsby, was already affecting services, with buses being used to shuttle between stations in the upper north shore. The new timetable also had an impact. This had been in place since November but required more train drivers since services had increased significantly (especially frequency).

Then came a spike in patronage in January. This was partly expected, but not to the extent observed – especially from tourists using the system. Coupled with some services being cancelled due to too few train drivers being available (too many approved leave and not enough of those being trained ready to take over), and the travelling public was delivered a cocktail of chaos.

You could say that the Sydney train system has become a victim of its own success with the best patronage growth in years – 20% in the last 12 months. But the system clearly is struggling to cope with such success. The events in January, which were in part out of the control of the system (i.e. the extreme weather), have become a big continuing news story.

Crisis a long time in the making

In taking a closer look at what happened and being asked to explain why, one must step back and take a broader strategic assessment of public transport in general and trains in particular in Australia’s largest city.

Previous governments (at least over the ten years prior to the current Coalition government winning office) failed dismally in terms of actionable investment in public transport. Lots of plans led to no real action.

Since coming to power, the Coalition government has started to invest in better rail infrastructure and services. This includes the NorthWest rail, the Western Metro, station upgrades, major improvement in service levels, integrated ticketing (Opal) and better customer-focused communication and service. There has also been a significant increase in bus service capacity, as well as light rail initiatives.

However, rail investment in new corridors takes time and money. The first part of the enhanced network will only come on line in another year or so, with much of it listed for 2023. The catch-up is admirable, but is it enough?

Solutions must involve all transport modes

As population grows, as attitudes to car use change – the Millennials in particular are increasingly not getting drivers’ licences – and as tourism booms, there is a real risk that we may only be buying a few years of growth. And then we will be back to where we are today, with crowded stations and lack of coverage throughout the metropolitan area.

Further reading: End of the road? Why it might be time to ditch your car

The sums being spent on rail improvements are significant but not enough to make a difference in delivering attractive capacity even for current users. But where will the money come from? The Coalition has prioritised investment in new public transport (train and bus), which is admirable, but more will clearly be needed if the government wants both to attract more people out of cars and manage an efficient and acceptable customer-focused rail and bus network.

With car travel dominating Sydney (typically 80% of all passenger trips), even a small switch has an impact. A 1% shift from cars is equivalent to a 5% increase in public transport use. This is enough in itself to create severe crowding on the trains. In peaks, the crowding is often not dissimilar to the Tokyo metro where someone has to push people onto the trains so the doors can close!

So what to do? Industrial relations issues can be resolved in the short term. So too can delays due to network malfunctioning (for whatever reason). The real challenge is finding appropriate ways to invest in public transport that will not only take pressure off the system but also support improved travel on all modes (including the car).

We are unlikely ever to build our way out of this situation given expected funding. Specifically, hundreds of billions are required and not tens of billions. What we need, then, is a new funding model that looks at the entire transport system. This will have to deliver sufficient funds to keep pace with growing demand, while ensuring that those who benefit also pay for the benefit.

For example, some of the wealthiest people in Sydney who work in the city use heavily subsidised train services (over 80% of peak trips to the CBD are by bus and train). Why are they not paying more?

The response is that if we were to charge them more they would switch to using their car. Fair comment. But why not reform car use pricing as well? The time has come – we have had many inquiries and commentaries on the urgent need for road-pricing reform.

Further reading: Stuck in traffic: we need a smarter approach to congestion than building more roads

Revenue raised can be used to support all transport but in a way that we get a balanced multimodal system that aligns with the goals of a truly world city such as Sydney. It is never too late to start this journey.