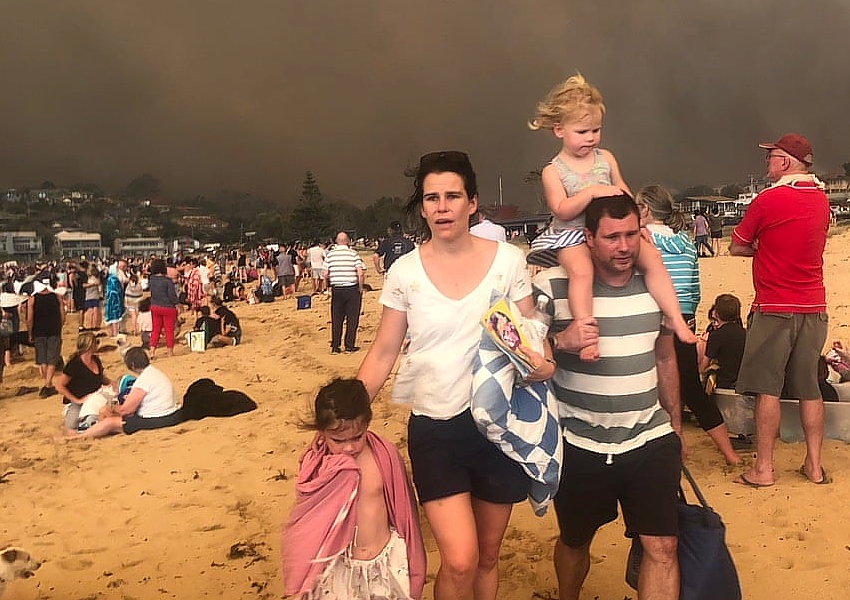 It has been said that ideological Liberal and National Party governments know the pricetag of everything and the cost of nothing. That is particularly true when it comes to trashing the natural environment. As the scientifically predicted cost of inaction and denial on climate change hit Australians with apocalyptic fury over Christmas and New Year, with no end in sight yet, two Australians who experienced the cost first hand wrote open letters to the Liberal Prime Minister and the National Party Deputy Prime Minister. We share them here with thanks to Guardian Australia.

I’ve always voted Liberal, but after sheltering my family on a beach I cannot support this government

“ While I spent the night with hot embers raining down on us at Malua Bay, I decided to write to Scott Morrison 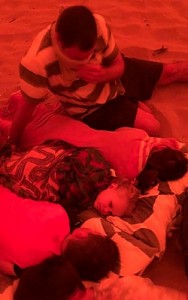 I decided to write to you as my family lay face-down in the sand, covered in wet blankets on Malua Bay Beach as hot embers rained down on us on New Year’s Eve to escape the Clyde Mountain bushfire.

Most of my family (not mum) and I have voted for the Coalition for as long as I can remember. I helped hand out flyers at the 2019 state election. However, after what my family went through the last three days, I can no longer support a government or party that choose to remain on the sidelines on climate change and the devastating effects it causes.

The Liberal party considers itself the natural party of government and its past achievements certainly give credence to that assertion. But any party or government that recklessly endangers lives and the environment is not fit to lead.

By not recognising climate change as a credible threat, you fail to take action on the many side-effects that climate change causes to our community. The one that I have personally witnessed is an increase risk and severity of bushfires. I took a screenshot of the life-saving Fires Near Me app and found most of the New South Wales coast was on fire. Anyone who could think this was status quo either has a hidden agenda or is delusional.

I can no longer hope that the “adults are back in charge”. You have failed to act and you have failed to lead. I have committed myself to ensure my family and as many people as I can manage will never be endangered by events that we fortunately lived through.

I present you a choice: stand up, lead and take action. Make Australia a global leader in the fight to prevent climate change and make the necessary preparations to build resilient communities and be remembered as the leader who provided hope to future generations. Or stay your current path and be remembered as one who could not lead, could not act and doomed future generations.

Dear Michael McCormack: a message from the heart of the bushfires

Wagga Wagga councillor Vanessa Keenan posted a letter to the deputy prime minister, her local MP, on Facebook after surviving the NSW bushfires. It is reproduced here in full, by permission 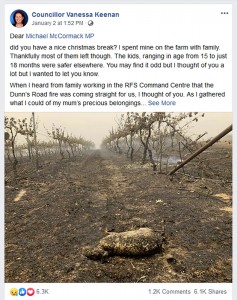 Did you have a nice Christmas break? I spent mine on the farm with family. Thankfully, most of them left though. The kids, ranging in age from 15 to just 18 months, were safer elsewhere. You may find it odd but I thought of you a lot and I wanted to let you know.

When I first saw the flames on the neighbour’s property and raced back to let the others know it had arrived, I thought of you. I thought of you again when I rang Triple 0, both times, to tell them there were people here and we had no way out.

When we sheltered in the fire bunker and desperately listened to hear if the fire sprinklers were still running, I thought of you. As we held our hands against the wall to feel the heat, again, you entered my thoughts.

After the first front passed and we went out and took the chance to refuel the pump that was supplying the fire sprinklers, I once again thought about you.

As we raced back to the door of the bunker and watched the firestorm approach from a different direction, crowning 150 feet above the trees, I thought about you.

When we emerged after three hours to an incinerated landscape dotted with injured and dead animals, I thought of you.

Now as we scramble to organise emergency fodder and brace for the weekend’s weather, I think of you.

When I keep filling my water bottle to ease my sore throat and lungs, I think of you. When I hugged my family today, who for over 24 hours thought we were lost, I’m thinking of you.

Did you think of us?

Did you think about all the devastated communities that will be impacted by your lack of action or even acknowledgement of climate change?

Will you think of us now? What will it take to get your attention? I have tears in my eyes writing this letter to you. I’m desperate, the whole country is desperate. Now is the time. Please. 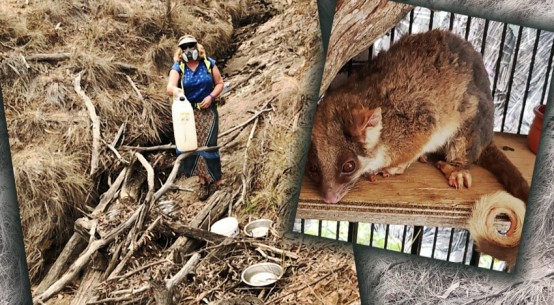 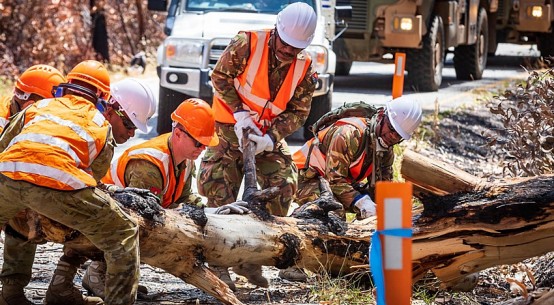