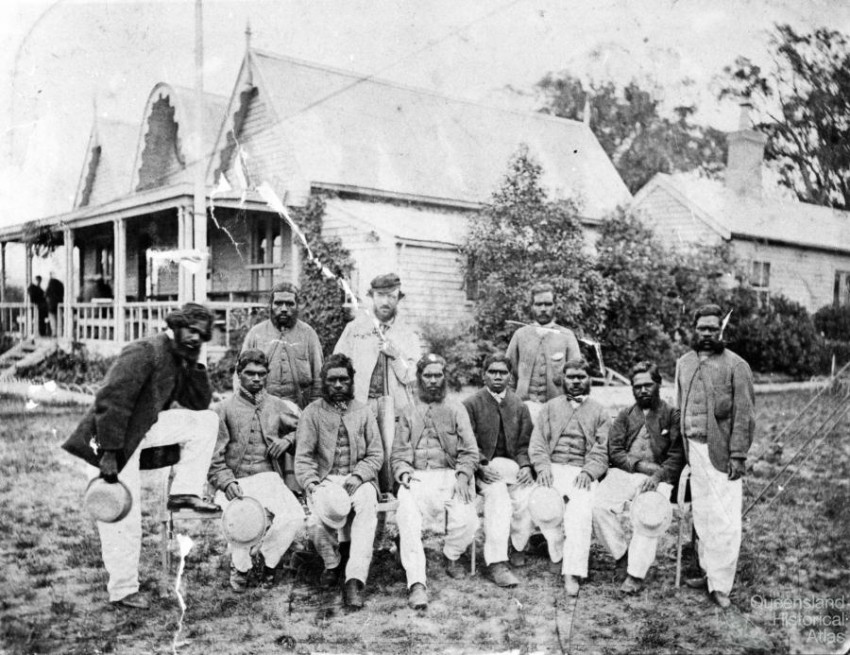 He was the man responsible for the creation of that uniquely parochial sport, Australian Rules Football (AFL), and yet Thomas Wentworth Wills is a name few recognise. His connection with this region is even less widely known but yet another intriguing component in a fascinating story.

Given his remarkable life – and talent – and the Australian preoccupation with all things sporting, this glaring oversight is difficult to fathom. In addition to being declared the ‘father of AFL’, Wills was also one of this country’s greatest cricketers; a celebrity sportsman before the age of such notions, an innovator of the modern form of that game, and the coach and captain of the first Aboriginal XI to ever tour England.

Perhaps his relative obscurity was influenced by the prevailing Victorian sensibilities of his era and linked to what was described as his ‘wild and reckless nature’ which ultimately led to his inglorious fall and bizarre and tragic end.

As is so often the way with tales that border on the legendary, various misinterpretations and myths arise around them. Despite suggestions Wills was born in Gundagai, Captains Flat and on the Molonglo Plains, research indicates two facts: regardless of how much Victorians might claim the game of AFL as their own, Wills was not only a New South Welshman, his childhood was spent here at Burra, the first property his father Horatio purchased after leaving Sydney in 1835.

Wills’ paternal grandfather had been transported to the Antipodes for highway robbery, receiving a pardon in 1803 before subsequently earning a fortune as a merchant. Wills’ dynamic father would add substantially to the family’s coffers, becoming an influential pastoralist and newspaper editor before turning his hand to politics. His own death however, in terrible circumstances, would both inspire and impact his son heavily in later years.

In 1840, Horatio moved with his wife and son from Burra to Ararat in now western Victoria, one of the few European families to take up residence in the area. Young Tommy’s first friends were the local Aboriginal children of the men employed by his father. Then, at the age of 14, the boy was sent to England to attend that country’s most prestigious educational facility, the Rugby School.

Wills’ sporting prowess became quickly evident, and along with dominating on the rugby field, within two years he was captain of the school’s First XI and soon after made his debut on the hallowed turf of Lord’s Cricket Ground, taking an astonishing 12 wickets.

The first 10 rules of AFL

On his triumphant return to Melbourne in 1856, the strapping young sportsman was considered ‘one of the most promising cricketers in the kingdom’. He also brought with him the English idea of cricket in the summer and rugby in the winter, although eventually declared the latter game unsuitable for the harsher Australian conditions and grounds.

Wills thereupon set his mind to the creation of a new, distinctly localised sporting pursuit and on an autumn afternoon in 1859 in a Melbourne pub with three similarly inclined brethren, the first 10 rules that would come to be adopted as the laws of Australian Football were drafted. He was 23 at the time.

In addition, Wills is credited with having introduced the now conventional oval-shaped ball and concepts such as the free kick for ‘marking’ or catching the ball.

The game set to vie for the title as our national sport quickly caught on and as clubs were established, Wills would play for many. His cricketing career also continued unabated, captaining Victoria to victory in the first inter-colonial game against NSW.

Then at the height of his celebrity, on pain of disinheritance, he accompanied his father for an ill-fated sojourn to the Queensland outback to establish yet another property. The year was 1861, and the pair arrived in company with some 20 others in the midst of a land war with local Aborigines.

Horatio, having always claimed to have good relations with the traditional inhabitants of the country, refused to carry guns, but at some level must have recognised the escalating tensions for he sent Tom and another boy on an errand that took them three days. On their return, they were confronted with the graves of the other 19 Europeans, marking the largest disaster of its kind in Australian history.

Retribution was swift and severe with some accounts suggesting three times as many Aborigines were killed as a result. Wills however refused to participate.

Despite the trauma – and evidence presented in a 2012 biography written by psychiatrist Dr Greg de Moore suggests Wills did suffer Post Traumatic Stress Disorder following the incident – on his return to Melbourne, the still young man set about creating an Aboriginal cricket team that would become the first Australian cricket team to tour England.

On the occasion of their inaugural game at the Melbourne Cricket Ground, Boxing Day 1866, 10,000 Victorians lined the streets to welcome them. This remarkable series of events is considered by some as the first real attempt at healing the racial divide.

Like a fullback that won’t let go though, controversy similarly clung to Wills. There were claims he moulded his chosen sports to best suit his talents – the first cricketer to bowl over-arm instead of ’round-arm’ as was the accepted practice; superseding the round ball for use in AFL because it enhanced his kicking ability – to more serious transgressions from brawling and gambling, drinking heavily and associating with ‘undesirables’ which for many of his peers and contemporaries included his relationship, but not marriage, to the working-class Sarah Barbor.

Many of these factors seem to indicate a determined downward spiral.

Wills own gruesome end only added further to the legend and the intrigue. Having renounced alcohol, he was admitted to Melbourne Hospital in 1880, ‘wild-eyed’ and ‘demented’ from Delirium Tremens, or the DT’s.

Shaking and suffering hallucinations, for Wills it must have seemed as if all of his demons had finally taken hold of his shirt-tails, and making his escape from the facility, he soon after ended his own life, stabbing himself in the heart with a pair of nail scissors. He was 45 years old.

Although the story is already larger than life, many other tales have circulated including those suggesting Tom was born ‘near Queanbeyan’ (actually Sydney with early years at Burra), to him bringing Aboriginal AFL and cricket teams to this area to play (he didn’t). Some of the more unfortunate but verified details are that at the time of his death, Wills’ was destitute and buried in an unmarked grave in Heidelberg, his parents declared unknown and his common-law-wife never acknowledged by his family.

Tom Wills was a uniquely Australian character who had some hand in bringing into being a unique game that has become a national passion.

At least in this region Wills’ legend continues to resonate with locals increasingly aware of his local connection – on 19 August, celebrations to mark what would have been the sportsman’s 179 birthday were held at our very own Captains Flat. The occasion apparently passed by as any normal day in the rest of a country that owes so much to a figure as extraordinary as any Ned Kelly or Don Bradman.

* Nichole Overall is the author of Queanbeyan City of Champions