Skip to content
You are here
Home > Editorial / Opinion > Opinion > The latest: councillors listen to community, agree to ‘real community consultation’ on EDE 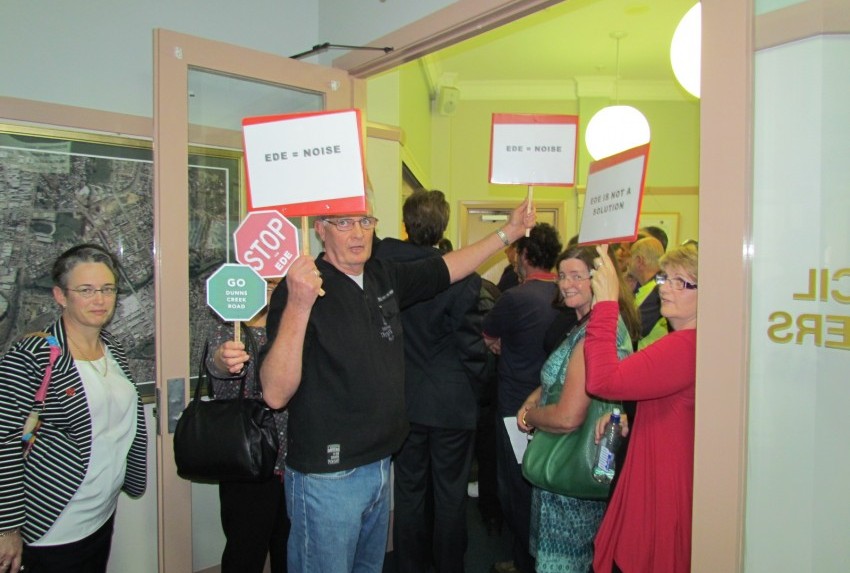 “A victory for common sense” and for real community consultation after five years of top down and ‘done deal’ communication from council about the proposed Edwin Land Parkway and Ellerton Drive (EDE) extensions.

That was the verdict from some of the 100 residents who packed the council chamber and overflowed into the foyer at the February council meeting.

They’d come to hear the vote on a motion proposing that council in March and early April publicise and hold a community forum to review the decision to build this road and examine other real options, with the road architects present to answer questions

The motion in the end passed unanimously after an argumentative start to the evening between residents, Mayor Tim Overall presiding and some councillors

The current council concept is that the roadways would allow growing Googong township traffic to reach the Yass Rd and the ACT by a new route.

The majority position at the February meeting – supported by councillors Cregan, Whelan, Burfoot, Winchester, Brown and Trajanoski – conceded that the process of community engagement (and maybe other aspects) may have been flawed ever since the 2009 traffic study that decided the EDE was ‘the’ solution and it was promoted to the community as a bypass.

Councillors said they had listened to an unexpected flood of community submissions between December and February.

“The major concern is that people feel they have not been listened to,” said Councillor Sue Whelan, speaking against a mayoral minute that would have held a community forum after council put together a ‘determination report’. “That’s absolutely different from holding the forum ahead of time and including the feedback.

“We are not following process properly and ending up with an unhappy community,” she said. ”We have had five years to do all this.”

Councillor Toni McLennan, (along with Councillors Peter Bray and Trudy Taylor) supported the mayoral motion by Tim Overall which lost 6-4. McLennan made a later statement saying she felt the Council staff was being demonised.

At the beginning of the meeting, a motion to cost the alternative route was ruled out of order. Councillor Brian Brown’s motion asked that a priority should be the costing and design for Dunns Creek Rd and that dedicated funds for this purpose (that had apparently been appropriated elsewhere) be reinstated.

Speaking to his forum motion Cregan said it was in response to lots of commentary on the EDE and that it was clearer that this road would not solve the problems of the CBD. “There are lots of questions that need to be answered”, he said. Even he has not gained access to the traffic engineers to ask questions, he said.

Winchester said that since this would be the biggest decision make by the current council with a pricetag approaching $100 million, “we have to be 100 percent certain” that destroying the natural environment and people’s amenity is justified.

He also noted that the recent information sessions and survey by council (during the public exhibition phase from December to February) were (as always) based on the assumption that the road is a ‘done deal’. He said it should be presented as a ‘proposed road’. (Big claps from the residents present).

In 900 or so submissions from current residents and supporters, councillors were advised to rethink the road. A recurrent theme is that the cost of this road, economically, socially and environmentally, outweighs any benefits for Queanbeyan’s traffic issues with further growth. On existing evidence it makes no sense.

Residents have been asking for some time: why is the plan going ahead despite proposing to afflict 1/3 of Queanbeyan suburbs with noise and new traffic, destroy the city’s bushland and compromise the river corridor and even threaten children’s safety in the case of Jerrabomberra?