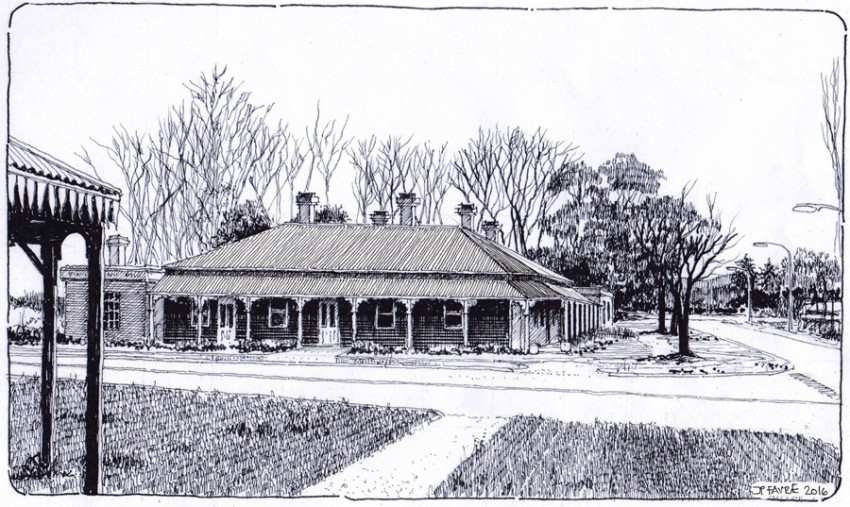 Christine M Knight talks to Richard Graham – entrepreneur, former Palerang councillor and appreciator of heritage buildings about his move to the Bungendore district and his recent purchase and restoration of The Carrington Inn.

A former American, Richard moved to Australia from northern California in 1980 with his fiancée, Linda, marrying in Hawaii on the way.

Older readers may remember that the 1980s began with the world in a major recession and the USA experiencing massive inflation and unemployment. President Jimmy Carter was dealing with the forty-four-day Iranian hostage crisis.

Richard had undertaken two ‘scouting visits’ in the late 70s and found Australia to be genuine. He used a phrase from the times, “what you see is what you get”, but career development was also a major reason in Richard’s and Linda’s move here.

A business specialist, Richard spearheaded the introduction of personal computer retailer ComputerLand and Microsoft into Australia. With a choice of major cities before them, they based themselves in Sydney.

After a fulfilling business career, a divorce, and at retirement age, Richard gave serious thought to how he wanted to live the next stage of his life. He says his move to Bungendore was a matter of evolution and a change in perspective on the things that define life and give it meaning.

He retired to a farm in the region. Rural life offered Richard and his family a safe community lifestyle, the opportunity to participate in community and serve it, and fostered his interest in the environment and heritage. Bungendore’s proximity to the nation’s capital, its cultural benefits, and quality medical services were additional bonuses.

His friendship with Toni Dale, former owner of the Carrington, led to his appreciation of its historical significance. When Toni retired around 2005, she suggested that Richard add ownership of the Carrington to his other varied retirement and business activities. Although he felt an affinity with the inn, his interests at that time meant he declined her offer.

But some years later, when the Carrington was again up for sale, Richard’s strong connection to place and his interest in things historical led to his purchase of the inn. He immersed himself deeply in research. He wanted the restoration work to reflect the essences of the period in which the Carrington had been built and thrived.

He summarises that period as being ‘about aspiration and change’. As he talked, the Great Exhibition came to mind. Readers may find this link of interest.

For Richard, the Carrington Inn offers the community something more than the beautifully restored Wintergarden complex and adjacent inn accommodation. It offers patrons the opportunity to reflect on a different lifestyle and a bygone era.

The reopened Carrington Inn has a world class catering team, headed by Executive Chef, Andrew Stansbie, Pastry Chef, Haritha Ekanayake, and restaurant manager, Merili Pihlamäe. All food served on its premises is prepared in house. I was particularly impressed by the pastries available to patrons in the tearoom.

It occurred to me that humankind may shape our buildings but thereafter the buildings also shape our community and reflect our values.