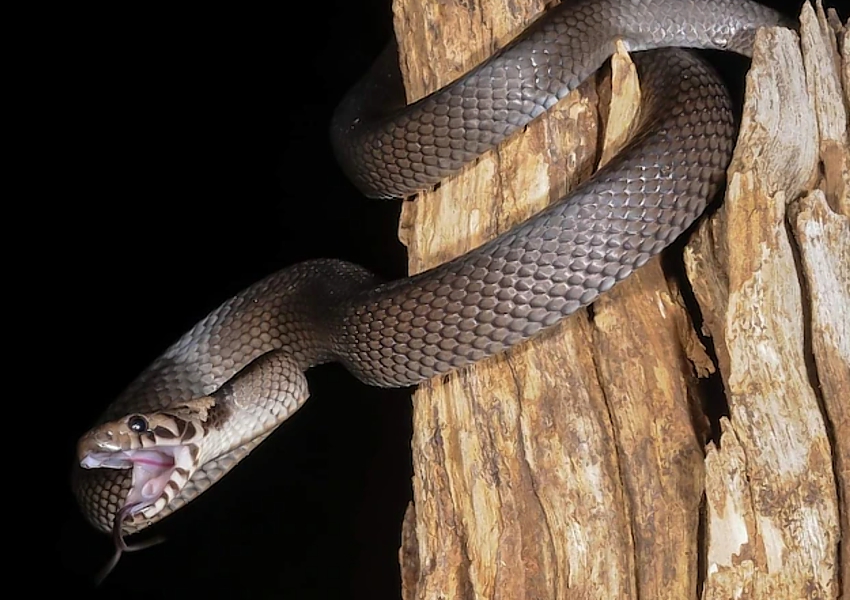 There are a lot of misconceptions about Australian snakes that can lead to potentially dangerous false identifications.

ONE MYTH THAT still gets brought up from time-to-time is that most venomous snakes don’t climb — ie if you see a snake in a tree or on a roof, it‘s either a harmless tree snake or a python.

But a study conducted by three snake experts has conclusively dismissed that idea.

ABOVE: Pale-headed snakes are one of the Australian venomous species to have been observed climbing. (Supplied: Scott Eipper)

In total, their research, which was based on literature studies, surveys, and personal observations, found instances of 20 different species of venomous snakes engaging in arboreal behaviour — tree climbing.

When their observations were expanded to include venomous snakes climbing things other than trees, or snakes under extreme stress, such as when fleeing predators or rising floodwaters, the number of climbing species rose to 31.

“Even though we have 31 species recorded, which is just over a quarter of all [Australian] elapids, that number is likely to be higher,” said Matt Sleeth, ecologist and lead author on the paper.

“Due to the difficulty of surveying this behaviour in these animals, it is likely that there are more [venomous elapid] snakes that do climb.”

A sliver of truth?

So, where does the misconception come from? Like most rumours, it is grounded in some truth.

Blind snakes are small, shy and rarely seen, file snakes are aquatic and live in northern swamps and billabongs, and pythons are widespread, non-venomous and are prolific climbers.

Then there are the other two: elapids and colubrids.

Almost all our venomous snakes belong to the elapidae family.