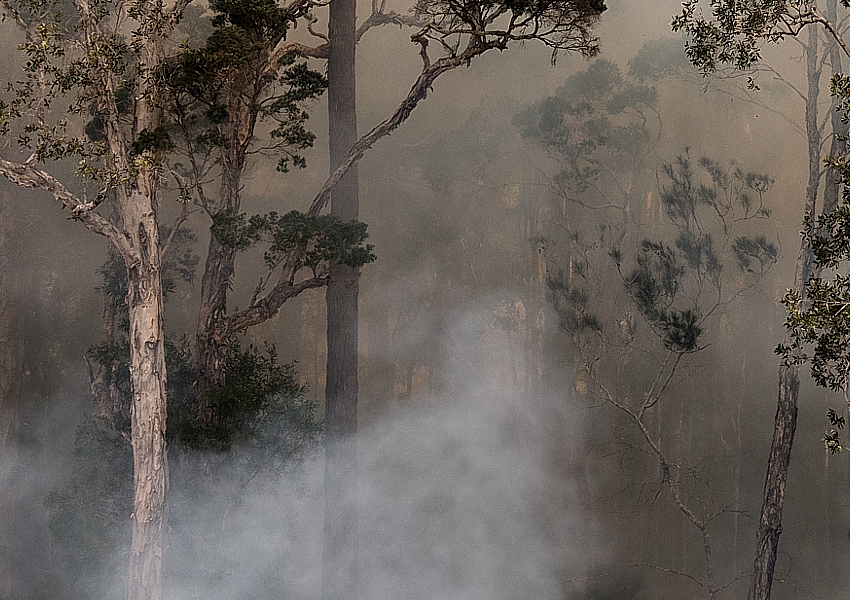 OPEN LETTER TO US ALL

“Scott Morrison your thoughts and
prayers aren’t worth a pinch of . . .

IT’S NOW THURSDAY December 5, 2019. Again, I awake to the air heavy with smoke, the reminder that Country is dying. Wildlife … many who simply can’t outrun this fire, the forgotten ones, snakes, small birds such as Scrub Wrens, Spinebills etc will burn to death … their ashes will return to the ground and they will be forever forgotten.

I sit up in bed, looking out the window at a sun that doesn’t rise anymore, day now comes with a simple hazy glow … night arrives extinguishing that glow, no blue skies, no clouds … just a constant heavy haze.

The smoke is everywhere, in everything … everywhere I turn there is a reminder that because of some who refuse to act on Climate Change, who refuse to grow ‘a set’ and make tough decisions like for example reigning in the unsustainable farming sector, my Ancestral Home is dying … and now burning to death.

My heart aches as this useless government still does nothing, as they STILL profit from the slaughter of Kangaroos, as the Commercial Kangaroo Killing Industry continues … all whilst Country burns to death.

I’m receiving dozens of messages daily of people in distress, speaking of Kangaroos fleeing the fire ending up on farms, then being gunned down by those who see a Sacred Totem Animal as a pest… when it’s they themselves who are the ongoing problem.

It sickens me to my very core and nothing is being done about it. No mention of that, anywhere. All I read about are the Koalas. Don’t get me wrong as an Indigenous Woman wildlife is my family, however if the spotlight isn’t shone on what’s happening to Kangaroos, they will simply slide off the radar.

Imagine if Koalas were still being gunned down for profit whilst fleeing the fires, there would be a national and worldwide outrage, but nothing re Kangaroos.

“Imagine for one moment if you will . . . fleeing the fire, managing to in blind terror get over all the fences that have  greedily been strung across Country

… you and your family clear the fences … you see open space in front of you … safety … you arrive … safe …you relax, regroup, only to that night flee again for your life as the unhinged gun you down … simply because they can and because you are on “their” land — the slaughter fuelled by the very same mindset of colonialism that arrived here in 1788.

My mind drifts back to my bedroom as a tear rolls down my cheek, I’m still here in bed, my head propped up against the bed head, puppy dog at my feet. I turn and look at my partner, who for the first time in weeks, is asleep next to me. He has been working on traffic control [at] The Ruined Castle Fire here in The Blue Mountains, Katoomba.

Council employees get 12-hour shifts while residents say ‘thank you’

He like many other Blue Mountains City Council employees have been on 12-hour shifts. He leaves home at 5am, arrives at work by 6am, is briefed about the previous night’s activities from the night shift crew and is assigned to an area where he will be for 12 hours straight.

Blue Mountains City Council couldn’t even be bothered to bring their employees a bottle of water. On top of everything else there’s a feeling of anger and disappointment as many employees feel they are taken for granted and not appreciated. 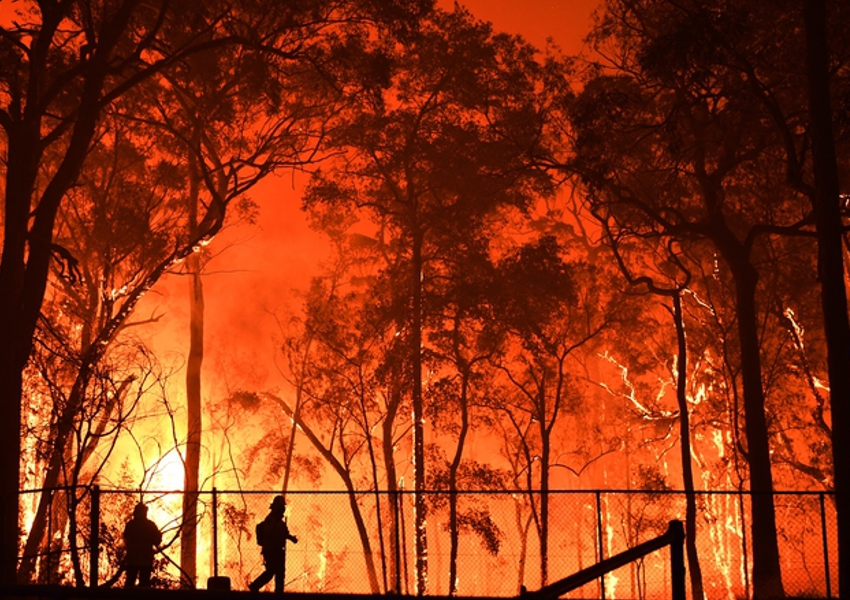 They will (for 12 hours) direct traffic around closed roads; ensure the safe exit and entry of emergency vehicles; look after areas where people have been evacuated from their homes; they will have to question people and ask for ID so as to protect the community from looters; they will have to answer every conceivable question asked by the public and even just chat to those who are feeling very vulnerable, reassuring them that everything is ok and providing up-to-the-minute updates on the fire activity.

IMAGE: RFS volunteers and NSW Fire and Rescue officers battle the Gospers Mountain fire northwest of Sydney. The fire is more than 300,000 hectares in size. Source.

They will also deal with distressed people, emotionally-exhausted people… all whilst receiving no mental health support themselves, and no training on how to themselves deal with these situations. And in 12 hours, not one Thank You from their employer.

The highlight comes when the beautiful and wonderful residents bring a thermos of hot water, some sugar and tea, some biscuits and conversation. The words ‘Thank you’ that some find so hard to say, is thrown around the smoke-filled air.

The boys are re-energised as their smiles shine through the smoky haze, if only for a brief moment, they feel appreciated.

I wonder how they cope having to watch Country burn right there in front of them whilst putting on a brave face for the public, whilst also feeling unappreciated by their own employer.

My partner will sleep all day today, we don’t have air conditioning here in our beautiful old weather board cottage so it’s not a relaxing sleep, as the heat and smoke are never far away as our open windows sway in the relentless wind… but, it’s sleep. He is on night shift tonight and will work from 6pm till 6am.

All around me there are weather warnings coming in, emails. The radio plays old 1940s music as I find an Internet radio station that will take me far away from here as I listen to the music of happy tunes echo through the house. I return to reality with a thud as the calls of the Cockatoos sound across the valleys.

I get up out of bed and I move to the dining room table, every day now is an effort. The stress of 12-hour shifts eating into our relationship; arguments are now never far away in the two-hours-a-day I get to spend with him.

The thoughts of all the carnage especially for myself being Indigenous and having an incredibly strong connection to Country eat at my very being. Both our frustration and anger on show at a situation that is entirely preventable IF we had a Government and a Society who actually cared enough and [also really supported residents and volunteers including our amazing Wildlife Rescue Volunteers and organisations].

Without Country and healthy abundant Bush there is no us … without wildlife there is no us. Kangaroos who naturally reduce fuel loads on the ground; who are essential in the aeration of soils; who are so desperately needed for their role in seed dispersal; who are the core of ensuring a balanced healthy country … are being gunned down.

Now more so than ever we are seeing the result of 231 years of the mismanagement of Country. These fires are yet again another warning …destroy Country and Country will destroy you. Another warning that is being completely ignored.

“Farming is about respecting and understanding the Country upon which you stand and it’s about local community.

Farming isn’t about export and feeding the world, that’s capitalism. Farming is about respecting the Country upon which you stand. It’s about understanding Country and the role wildlife play in the survival of that Country. Farming is about supporting local communities.

Farming is about diversity, being aware of the fact that you are standing on a very old and ancient land that my ancestors have walked for thousands of years — harvesting berries, nuts, fruits. Never taking all, till the trees were bare and the ground empty, but only taking enough to sustain us … not to feed anyone else … but ensuring our own mobs sustainability and ensuring that all were sustained including wildlife. One doesn’t survive without the other.

According to the White Man that’s exactly how it works … one does survive without the other … and isn’t that working well after just 231years.

I stop and bow my head as I look at the clock on the smoke-stained wall, as spider webs sway in the relentless wind, the day almost gone, and I feel no want to do anything but sit.

Outside I have animals to feed, cleaning up to do as the winds bring down more branches, I have emails to write, articles to research. I have no want to do anything as my mind drifts back to the carnage of Country and how all of what’s happening right now could be avoided … if only people cared.

I take a deep breath as I head to the fridge for a glass of water. As I open the fridge door the smoke races in, I shut the door quickly and pour cold water into my glass. Those watching their houses burn, where is their cold glass of water? I can’t bring myself to drink … as the glass slips from my hand and crashes to the floor, this cold water all over the floor now falling into the cracks of the cedar floor boards — the hot burning tears roll down my face.

Postscript
The day after we prepared this story for publication Aunty Ro emailed:

“It’s unbelievable here. The Ruined Castle Fire is out of control again and we are watching the Green Wattle Creek Fire as well. If they join we are in big trouble! Embers dropping here today, so, not good!”