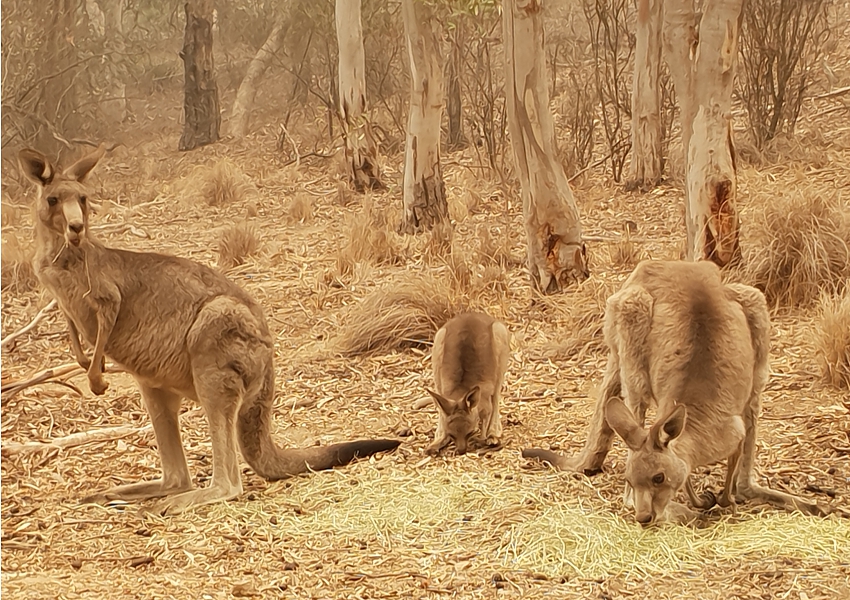 THEY ARE REFUGEES too. The wildlife, dispossessed, shot out, and now, with their food, water and remaining habitat dried out and burned, even more in need: those that didn’t die outright in the flames.

Let’s look more widely. To our international shame, we haven’t, as a country, been very charitable to human refugees. The recent overturn of the Medevac Bill to satisfy a self-congratulatory Christian Prime Minister and his cohort in federal parliament being only the most recent example.

Christian values? Where are they hiding these days in our culture — with the notable exception of kind non-government aid and generous personal sympathy in bad-luck human situations?

Maybe we can build on that at least. Our wildlife, our animal friends generally, are the most vulnerable and voiceless in our profit-oriented society. Legally they have no rights in a private property culture. So, it seems to be down to us to help them through these unprecedented times that will not get easier.

CAPTION FEATURE IMAGE:  Yesterday [Sunday 5 January 2020] was terrible as the picture from Bungendore above shows. However rain overnight cleared things up considerably and we are hoping for more rain today.

Sharing is the key — not reaching for the gun as traditional response when the plight of wildlife confronts us. The conundrum is highlighted in the current story out of Cowra that you see in the region section.

I could not understand recently as otherwise intelligent people implied that somehow wildlife is immune to the extreme conditions facing us all and don’t need charity, compassion and help.

In this comfortable, dismissive view, wildlife finds food on parched ground and in dried-out trees. The animals find water — somewhere. No need to worry. And if they start crowding around your green space and seem to ask for help, maybe it’s time to decide there are too many and reach for the lethal solution.

Koalas along the east coast have been much in the news, even before raging fires ripped through their homes and killed still uncounted numbers. It was reported that koalas need help in the surrounding drought because their staple food from the trees have been drying out. 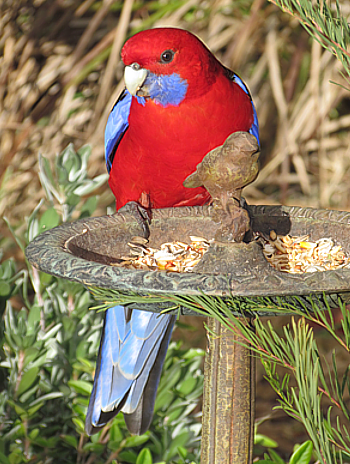 The same theory applies to the arboreal wildlife closer to this region. If the foliage doesn’t carry moisture, possums, birds, insects seek supplementary water that we can provide. Many of us fill birdbaths and some of us put out water for the possums. I do and I know they drink it. Ditto for reptiles: put out water on the ground. Just, don’t put it close to the house as snakes might be attracted.

It is indicative of our post-colonial culture and how it has shaped our view of wildlife (are they convenient to us, is their skin worth money?)  that I have been hesitant to bring up the fact that I supplement feed some kangaroos. It’s past time to share and encourage sharing, wider than just with the birds that many people do love to feed.

By the way, it may shock kind bird lovers to learn there is a whole segment of the Australian population, including politicians, who think Australia’s wonderful birds are either inconvenient or just a fun shooting gallery, as Peter Hylands reports in his article Australian native birds die in thousands to please rice growers and hunters. 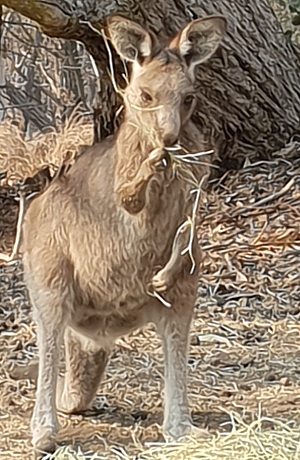 Red-neck and swamp wallabies are also welcome to the hay I serve — if they are willing to try something other than exotic nursery plantings which are their all-time favourite fare. Kangaroos and wallabies can eat the same hay as horses and particularly the lower-in-nitrogen varieties like TEFF. There are also commercial kangaroo pellets that some people feed, or rice-based horse pellets.

These animals are refugees from a hostile environment as much as any human in need.

A recent estimate for the amount of bush, the wildlife’s home, that has been burned in NSW in the past month was something like 20 percent if that is believable. More definitely and tragically that same figure was published for the Blue Mountains National Park.

Aunty Ro Mudyin Godwin lives near Katoomba. In an open letter in this edition of the Bulletin, she powerfully shares her experiences and thoughts as an Indigenous woman about the fires and the fate of the wildlife. She also describes the experience of her partner: working 12-hour days on the fire-front for the community and for tourists.

Christian, or indeed any brand of compassion would be great to see amongst those who dictate policy and therefore affect our lives at local, state and federal level in these times.

Are the end-times upon us?

An interesting slant on what many, including firemen, have called ‘apocalyptic’ weather conditions came to mind with the gathering of some 47,000 Jehovah’s Witnesses in Melbourne in November.

I never found the right moment to ask any of these seemingly happy people how they are feeling at the moment: about their religion’s belief in the imminent, apocalyptic final days when some will be saved and have a nice end-time, while the rest burn or face some other miserable fate.

How are they viewing what is happening around them as a result of climate change and extreme events? Are they pleased? Seeing encouraging signs?

Maybe there is a clue here to the detachment from the risks of extreme weather shown by our Prime Minister, who wants us all to be quiet and accepting.

As large sections of the continent burn with dramatic loss of life and property, as people choke on smoke and are afraid; he talks about a religious freedom bill or says ‘look over there’ to New Zealand.

He follows up by expressing his belief that the heroic volunteer firefighters don’t need more government help: they like losing paychecks while putting their lives on the line for us, in his view.

Is this the logical end-game of neo-liberalism and shrinking the state as Guardian commentator Van Badham suspects?

Or, is it a holdover from the American roots, marinated in end-times, apocalyptic theology, of the PM’s Pentecostal brand of Protestant Christianity?

Either way it doesn’t sound promising of compassionate leadership.

So let’s, we the people, do what we can to share the Christmas spirit with our fellow creatures.

Bouquets to NSW Liberal Environment Minister Matt Kean for coming out unequivocally linking the state’s extreme weather with climate change and talking about the need now to make that energy grid transition. You can read it here.

His Premier to her credit backed him up the next day. A National Party colleague, big surprise, disagreed. Let’s not give them more oxygen.

Meanwhile, over at the recent Madrid COP25 Climate Summit: we give our ‘pollies’ a ZERO for compassion and leadership! 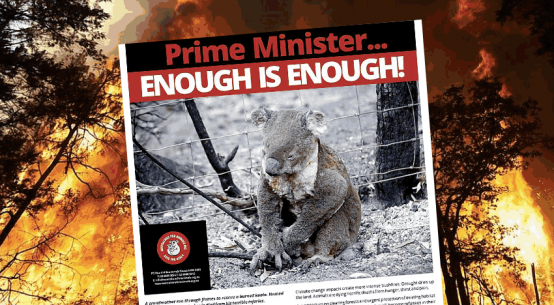 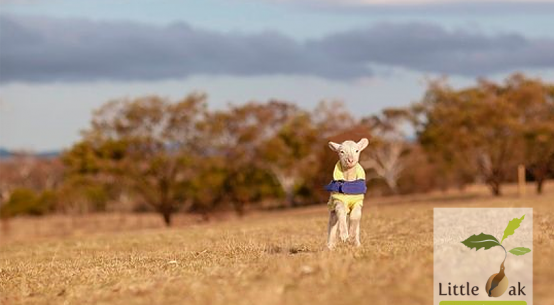 Far from live export and other animal nightmares