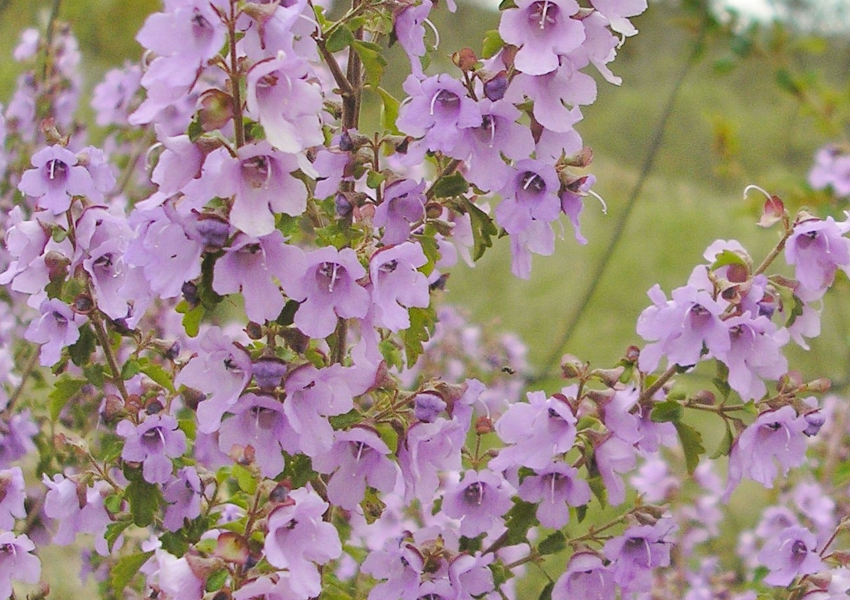 FOR THOSE who appreciate a splash of blue, mauve or white in their gardens at this time of year, mint-bushes would have to be one of the better choices. These eye-catching plants are in the same family (Lamiaceae) as the aromatic mints we use to flavour our food. We do have some native mints – Mentha diemenica grows locally in patches along creeks and in damp areas – but most of those used in cooking come from overseas. All of the mint-bushes (Prostanthera spp.), however, are endemic Australian plants.

In size, they are mostly shrubs of medium height, but there are semi-prostrate mint-bushes – and, at the other end of the scale, Prostanthera lasianthos, the Victorian Christmas Bush, can develop into a small tree under suitable conditions. The leaves of some mint-bushes are not strongly aromatic, but others definitely live up to their name.

Prostanthera incisa (Cut-leaved Mint-bush) is one of these. On a warm day, its minty odour can waft for some distance. This is one of the most attractive species in this group with masses of mauve-blue flowers obscuring the foliage in a good year. Although its natural home is the edge of rainforest, it seems quite hardy in drier areas.

The Round-leaved Mint-bush (P. rotundifolia) is probably the species most commonly grown in gardens – for good reasons. It is a neat, fairly dense shrub with dark green leaves and a spectacular display of violet-blue flowers. There is also a pink flowering form of this one.

Both of the above flower in mid-spring, but there are later flowering mint-bushes.

P. phylicifolia is one of these. It grows on rocky outcrops and in shallow hillside soils (it is quite common in the Tinderrys area) and has dark crowded, linear leaves and white or occasionally pale blue flowers both with darker throats.

A much smaller, later flowering mint-bush is P. saxicola var. montana. Some forms of this species are spreading, ground-hugging plants found in heathland and dry woodland areas. Flowers are white with a purplish throat and can completely cover the plant.

The latest flowering mint-bush is probably P. lasianthas, the Victorian Christmas Bush, which can flower from November to March depending on the conditions under which it is growing (it is a widespread species ranging from Queensland through New South Wales and Victoria to Tasmania). The tallest of the mint-bushes, it can grow to the dimensions of a small tree. This one grows along the Mulloon Fire Trail and in Tallaganda Forest. It flowers heavily, bearing white flowers with purple and yellow throat blotches.

The closely-related Westringias are hardy, fast-growing plants with attractive white flowers. The flowers are similar to those of the mint-bushes, but have five sepals surrounding the flowers (the mint-bush flowers have only two sepals). Many of the Westringias in nurseries are robust hybrids with white or bluish flowers. Westringia eremicola, which grows along the Murrumbidgee, is a small, daintier shrub with good displays of white flowers which turn pink as they age.

Mint-bushes need well-drained acidic soil to do well and prefer semi-shaded positions.  They are intolerant of waterlogging or sudden changes in the amount of water in the soil.  The ones I have planted rely on natural rainfall once they are established, and that seems to be sufficient.

Both mint-bushes and Westringias are hardy, fast-growing plants. They react well to pruning and could be used as hedge plants or as contrast plants amongst the many yellow, orange and red spring-flowering plants.