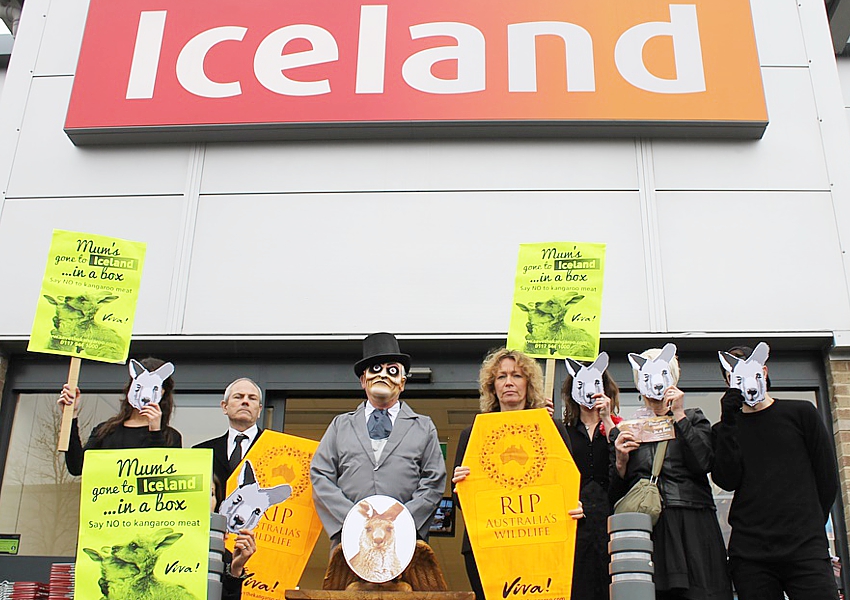 AFTER RECEIVING CRITICISM from animal welfare groups and pressure from consumers, British supermarket giant Iceland has announced it has stopped selling kangaroo meat.

Animal welfare advocacy group Viva! has been conducting a long-running consumer campaign included a funeral procession for wildlife inside an Iceland store and a nationwide Day of Action, demanding they stop selling kangaroo meat.

Iceland marketed Australia’s national icon to consumers as a “low-fat exotic meat”. However, they failed to mention that the kangaroo meat industry is one of the most brutal and violent in the world.

Juliet Gellatley (pictured), founder and director of Viva!, said kangaroo meat “is sold as ‘just a bit of fun’, but don’t be fooled. It is the product of suffering and blood-shed on an enormous scale. Millions are shot every year at night in Australia’s vast outback. Mesmerised by powerful search lights, the animals are supposedly shot in the head but many are mis-shot and die a slow, agonising death.”

Joeys are pulled from their dying mother’s pouch and bashed or stomped to death and at-foot joeys are either shot as they flee or may escape to die slowly of predation or starvation.

Beware hygiene and risk of disease

Viva! and consumers heeded expert evidence from both the UK and Australia about the food risks associated with animals shot in the field, hung on rusty hooks in unsanitary trailers (with blood, maggots and fecal matter having been noted), and after many hours (often in over 35 degree heat), making it to chillers, with further time and travel then to processors.

Australian sources told the Bulletin more recent independent testing for bacterial contamination found some E.coli and salmonella plus evidence of a cover-up with acetic acid wash of the meat. Both Russia, once the biggest client, and China have declined to sign up for kangaroo meat due to both hygiene and welfare concerns.

Gellatley notes that in the UK (if not in all of Europe) it is a common misconception that kangaroos are farmed; when they are in fact completely wild animals. “As such, their population can and do fluctuate massively. They can be especially impacted by factors such as drought (which is only expected to worsen because of climate change) and disease.

“Popularising and commercialising the meat of wild animals – whose populations are finite and unstable – is deeply irresponsible and potentially disastrous.

“Whilst populations can build up in some areas they have plummeted in others. In 2015 alone 6.8 million kangaroos were earmarked for slaughter. According to the Australian Government’s own figures, since 2001 (compared to 2015) there has been an overall drop of 12,577,598 kangaroos in the areas where they are hunted.”

Kangaroo slaughter is also being boosted by a huge upsurge in unlimited ‘damage mitigation’ permits being handed out in drought-affected Queensland as if killing the wildlife will make marginal stock operations and the weather more agreeable.

Keith Hann, Iceland Director of Corporate Affairs on 30 January 2018 said “I am happy to confirm that Iceland removed all lines containing kangaroo meat from sale last year, in response to feedback from our customers”.

Viva! has campaigned against the sale of kangaroo meat since the late 1990s. The welfare group has also successfully stopped major British supermarkets Sainsbury’s, Morrison’s and Tesco from selling the meat. Only Lidl has failed to listen to Viva! and their customer’s concerns about the meat and as a result is the last major supermarket still selling it.