Skip to content
You are here
Home > Region > Where do the Eden-Monaro candidates stand on climate change and clean energy? 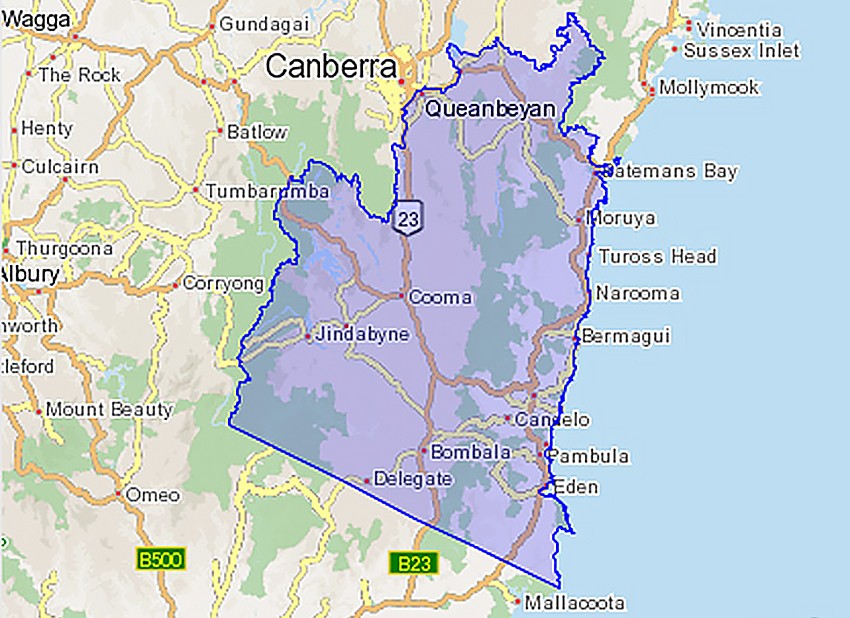 The District Bulletin sent these questions to the three main party contenders in the upcoming federal election.

(The District Bulletin puts these issues amongst the top on our agenda, not least because much of the big media still treats climate change existence and response like a periodic novelty item – rather than reporting an ongoing narrative about the overwhelming risks looming for the Earth and our established lives and livelihoods but that real solutions are at hand too).

Bulletin: Given warnings by the World Meteorological Organisation this week about climate change, and a report from the Climate Council that climate change is associated with coral bleaching on the Great Barrier Reef, would you agree that urgent action is required to mitigate?

Mike Kelly ( Labor): “Absolutely – there’s nothing more urgent. Immediate effective action is required. There has been a complete failure to act on the part of the Coalition. Direct Action is absolutely inadequate. Under Labor emissions in energy generation were 11% lower in the first year of the Clean Energy Future package. Under the Coalition emissions levels have risen. And now with the Paris Agreement, we’re not holding up our end of the bargain.”

Tamara Ryan (Greens): “The Greens have been calling for urgent action on climate change for decades. It is absolutely needed to stop catastrophic changes in the global climate. All serious scientific evidence shows we are in the midst of a global emergency, which will hit most marginalised communities and vulnerable ecosystems, including regional areas, hardest. We need to start taking climate change more seriously, in order to work for climate justice”.

Bulletin: Would you accept that there is a need to move rapidly away from coal to renewables?

Hendy: No specific answer though he did acknowledge in his answer to no.4 that “Australia’s energy sector will continue to transition to a low emissions future”.

Kelly: “Absolutely, this country has a tremendous opportunity to invest in innovative technologies. The Coalition has shown nothing but hostility to renewables – they take a command economy approach with Direct Action which has killed renewables investment in Australia and particularly our region. Coal is a danger to our health. Over 3000 Australians die each year from fossil fuel pollution and it adds $6 billion to our health bill. We have to either come up with new technologies to eliminate emissions from coal, which is not in sight, or move straight on with the renewable technologies that exist. Our region stands to gain enormously from such development. There was $1billion in private investment in renewables in Eden-Monaro when I was a member which came to a complete halt when Peter Hendy took over. We have the resources (solar, wind, wave, geothermal etc) and we’re close to the grid and there are many opportunities for spin-off businesses. These opportunities have all fallen off the cliff thanks to the Coalition.”

Ryan: “The Greens have been fighting to shift our economy to a renewable one for decades, but foot dragging by both major parties and their corporate backers means the issue grows more urgent by the month. The Greens support an equitable and speedy transition to 90% renewable energy by 2030. The transition must ensure that no worker is left behind and that their skills can be reappropriated in new industries. New initiatives seen in such places as the Latrobe Valley, where workers collectivised to form an anti-capitalist, pro-renewable factory, show that solar and wind power are the way of the future. My generation* are sick of being told we can’t afford to transition when the stats show, we can’t afford not to.”
* (I’m 26 years old).

Bulletin: If so, do you still support the development of any new coal mines in Australia? If so, which ones?

Kelly: “We still need coking coal for the production of steel but existing coal mines can probably cope with that for the foreseeable future. Investors are abandoning the fossil fuel field so thermal coal enterprises are closing. There’s a clear signal coming out of the market place.”

Ryan: “I don’t support opening any new coal mines and more importantly, my party doesn’t. Each new coal mine is simply another nail in the climate coffin. While ALP and LNP continue to support the opening of coal mines, such as Whitehaven, Greens support people over profit. Young people, farmers and activists are being arrested for peacefully protecting our farming land, water, forests and communities, while big companies continue to profit at our expense.”

Bulletin: The government has just announced a one billion dollar Clean Energy Innovation Fund (CEIF) that will incorporate both CEFC and ARENA, yet it appears it will not provide capital grants, as ARENA did and only loans, as CEFC provided. If this is the case, do you support this move? If so, can you justify the elimination of start-up grants for large scale renewable projects?

Hendy: “The Turnbull Coalition Government will retain and reinvigorate the Clean Energy Finance Corporation (CEFC) and the Australian Renewable Agency (ARENA).The two agencies will work together to provide debt and equity capital for investment in Australian businesses and emerging clean energy technologies.

“The centrepiece is the establishment of a $1 billion Clean Energy Innovation Fund to support emerging technologies to make the leap from demonstration to commercial deployment. It will be jointly managed by the CEFC and ARENA, drawing on their extensive expertise and will operate in a space which sits between the traditional areas of the ARENA and the CEFC.

“Traditionally ARENA has focused on providing grants for applied Research and Development and Market Demonstration projects while the CEFC has focused on providing capital for more mature renewable and energy efficiency technologies.“The new fund will provide debt and equity for a range of market demonstration projects and technologies which are at a less mature stage of commercial deployment; such as scale solar with storage, off-shore energy, biofuels, and smart grids.

“Importantly, ARENA will continue to manage its existing portfolio of grants and deliver the $100 million large-scale solar round. Once the round is complete, ARENA will move from a grant based role to predominantly a debt and equity basis under the Clean Energy Innovation Fund.

“Just as our economy is successfully transitioning from the mining construction boom to a new more diverse economy—fuelled by innovation, the opening of new markets, and more investment in Australian enterprise—Australia’s energy sector will continue to transition to a low emissions future without a punishing carbon tax.”

Kelly: “It’s extraordinary. For the past two and a half years the Coalition has sworn they were going to destroy the CEFC and even said it would be a double dissolution trigger. With CEIF, no new money is being leveraged. They are working with a structure that Labor introduced. CEFC is the largest venture capital body of its kind. There is nothing new here other than a pathetic attempt to “green wash” the Coalition. It’s a classic turn of Turnbull – all smoke and mirrors. He’s a man of superficialities and not of substance. He’s not taking serious action on climate change. He is supporting a policy he roundly condemned in 2010. He has utterly betrayed his owns words and principles”.

Ryan: “The announcement of CEIF is another disingenuous policy from the LNP government, like Turnbull’s catchphrase “continuity and change” – a bad egg wrapped up as an Easter one.

The announcement lacks credibility because ARENA’s funding has been cut so there is less funding overall, and the door is left open to so-called ‘low pollution’ projects like gas, which is one of the biggest emitters of methane. The scheme is an example of the LNP and their corporate mates missing the point by eliminating start-up grants in favour of loans, when we should be making research and development of renewables our highest priority. I ask Peter Hendy and his Turnbull government – how is it that we can pour billions into funding of coal mines every year and provide huge tax incentives to coal mining companies, but can’t afford to continue or expand these grants?”

Bulletin: Would you support these CEIF funds being used to build a concentrated solar power plant in Port Augusta?

Kelly: “Absolutely. That’s what we set it up for.”

Ryan: “Of course. The Port Augusta project is a prime example of why we need to start thinking of just transitions away from fossil fuels. A government funded solar thermal plant would ensure clean energy and jobs are guaranteed in the area. The problem with relying on CEIF funds, however, is that they are likely to be a loan, instead of the certainty of a grant.”

Hendy: No specific mention of wind is made in his answer to no. 4 (above).

Kelly: “Absolutely. We do not have any irrational, mediaeval approaches to wind energy. Boco Rock and Capital Wind farms are part of the matrix of renewable energy options in Eden Monaro that our policies facilitated. Along the National Energy Market grid, you can have a large range of renewable options of all forms, which largely eliminates the intermittency issue. We are also now seeing storage technologies emerging that will help with the management of the grid.”

Ryan: “Large scale wind projects could also benefit from government funding, particularly in Eden-Monaro where there is a massive potential for wind projects. Again, those projects need permanent solutions that CEIF can hopefully provide – but not with reduced overall funding which is dependent on loans.”

Bulletin: Because of the freeze of investment funds following all the reviews into the Renewable Energy Target (RET), it appears Australia may not even reach the reduced target of 33,000 GWh by 2020. What would you propose to ensure that this target is reached?

Hendy: No specific answer was given.

Kelly: “Yes, it’s a real tragedy. Australia was once a magnet for investment and is now a drag on OECD progress in the area. The ALP would implement a target of 50% renewable energy by 2030 and zero net emissions by 2050. We would introduce an emissions trading scheme, which we know is the most effective way to drive the deep economic transformation we must have, at the same time as generating opportunity and investment for our country.”

Ryan: “The entire renewable industry is in complete turmoil because of savage attack by Tony Abbott and more recently Malcolm Turnbull. The Greens policy of 90% renewable energy by 2030 will ensure not only that we reach our national target, but surpass it. Our costed policy is to create a new $500 million government authority – RenewAustralia – tasked with planning the transition to a new clean energy system over the next four years. Unlike CEIF it would be government funding, not government loans. Greens would create a Clean Energy Transition Fund to assist coal workers and community’s transition, plus implement pollution intensity standards to phase out coal fired power stations like Hazelwood.”

Bulletin: If most of the global community agreed to adopt a carbon tax, would you agree to its reintroduction in Australia?

Kelly: “We would not support a stand-alone carbon tax. However, an ETS that incorporates cap and trade places an effective price on carbon.”

Ryan: “We support a carbon tax and a carbon trading scheme that targets big polluters and sets high benchmarks for them, but don’t believe in rewarding those polluters for simply following the law. The Liberal government’s present scheme is simply another hand out to those big polluters to the detriment of individuals and communities who will bear the brunt of the LNP’s present inaction.”

2 thoughts on “Where do the Eden-Monaro candidates stand on climate change and clean energy?”