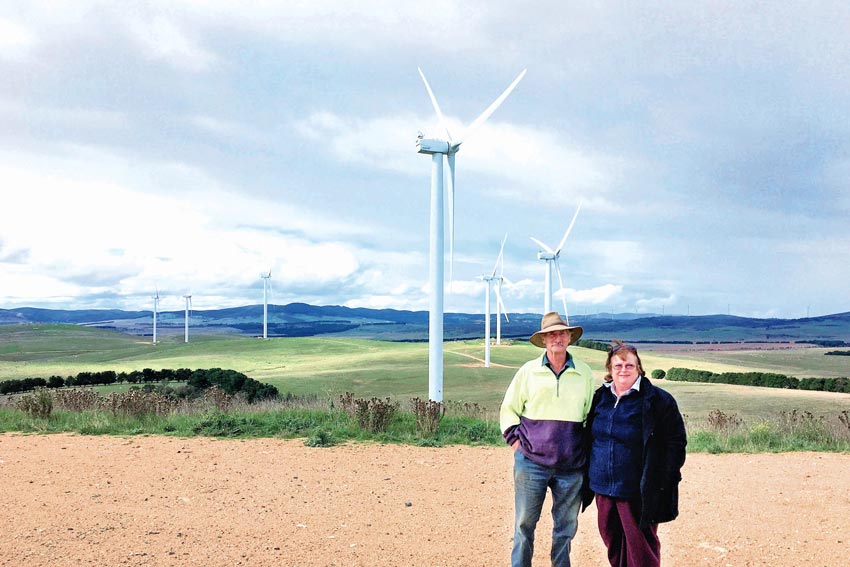 As a motorist heading home along the buzzing concrete of the Federal Highway, I have often gazed in wonder at the wind farms on the other side of Lake George – a useful distraction near the end of a long journey as my grand- kids vainly try to count each of the towers as the scene flashes by.

Squeaky clean and green, wind farms are fast becoming familiar artefacts and a massive part of our future energy mix. However sometimes progress in this industry becomes hostage to aesthetic and environmental controversy. The debate is too often hijacked by a rabid and fossil-fueled antipathy to anything with green credentials.

For me, the Tarago wind farms have always been an elegant addition to an already heavily modified landscape, and for many years I have really wanted to see them up close, and find out more about life under the giant fans.

Recently, Joan Limon and her husband Max were happy to show me around the wind towers on their sheep and cattle property near Taylor’s Creek, Tarago.

Downhill from the towers, in a quiet farmhouse kitchen, Joan and Max talked about the circumstances that led them to become wind farm pioneers in this region.

In the mid-nineties the couple were devastated when they were told that the sheep on their property might have been infected by the deadly Ovine-Johne’s disease. OJD is an untreatable and fatal infection of the bowel, reducing the ability of an animal to absorb food.

The Limon property was quarantined for three years. Adding to their trauma, in the following year the region went into drought, crippling their business.

Anxious to save the farm and future-proof their income, Joan and her husband heard of a series of wind studies being conducted by the CSIRO to identify sites for future wind farms in NSW.

“We have always been keen on renewable energy,” she said, “and early on we opted for solar hot water for the farmhouse. The potential to earn a steady income from renewable energy and still farm the land was a great opportunity for us.”

Based on their experience, Joan now strongly believes that wind farms are good for the local environment and the community, and when pressed could not think of any real negatives regarding their experience as pioneer wind farmers.

“Income from the towers now means farmers in this area can continue to farm profitably, but at lower stocking rates.  That is good for the land, especially during hard economic times and long periods of drought,” she said.

Early on and despite their enthusiasm, Joan still had to lobby strongly on behalf of themselves and other landowners for their part of the district to be considered viable for wind farming. Eventually the Limons received five offers from competing wind farm developers.

After consulting other wind farmers around the state regarding the offers the Limons signed a contract with Infigen Energy in 2002 in what could become part of Capital Wind Farm, the largest in NSW.

Following further noise and environmental surveys, construction of the towers began in 2007, and by 2009 the site was operational. There were six towers standing 80 metres high, with fan diameters of 45 metres.

The construction period was an extremely busy time for the local area, with over 150 people directly employed, and of course the expected flow-on benefits to the community occurred, as workers sought accommodation on local properties, and spent a lot of money in the surrounding towns and villages.

Additional benefits to the community came from the sealing of a number of local dirt roads that the council had previously found difficult to fund, and the donation of a brand new fire truck to the local rural fire brigade.

Joan and Max offered to take me on a short tour of their property. Driving up the hill towards the towers and against the beautiful backdrop of Lake George these graceful giants become more majestic the closer you get.

The swooshing of the fans can get a bit loud from directly underneath, but from a short distance the noise is unobtrusive. Nearby cattle and other stock are totally unperturbed.

As an active member of a local Taylor’s Creek environmental group, Joan is regarded as somewhat of a local bird expert, and she was initially concerned about the potential impact from the towers on bird populations and species numbers.

With a group of fellow ornithologists she conducted a number of extensive surveys in the area before, and after construction of the towers, revealing that there had been no measurable loss of bird species as a result of the towers.

The couple also observed large groups of wedge-tail eagles regularly catching thermals around the towers, and to this date there have been no collisions between large raptors and wind tower fans.