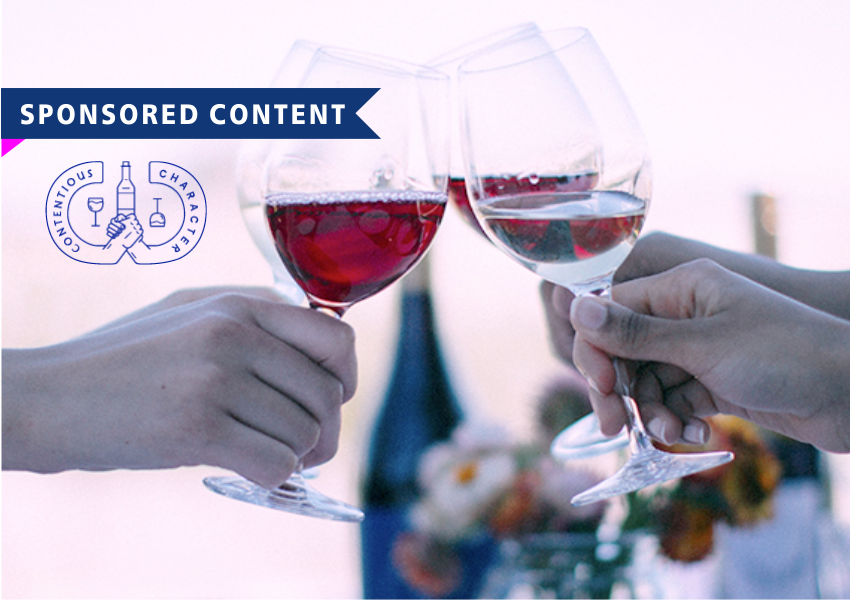 IN THE MIDDLE of Wamboin, tucked behind an extended driveway lined with green and yellow flora, is Contentious Character — a vineyard, winery, cellar door and kitchen — specialising in working their wines into their kitchen menu. A place where the wines and the food, have a delicious twist.

The menu at Contentious Character is inspired by a love for Australian ‘wild’ ingredients, as well as a love for the wines, that are all home grown and made on site.

The Contentious Chef is always on the lookout for new and interesting ingredients that they haven’t heard of or tasted … on the new menu they have every dish with at least one interesting element that is either a ‘local thing’ or a new ingredient that people don’t know about or something native. So with every dish they’re trying to spark a little contentious debate.

Being a winery, they try to play off that with all the food. They use the wine in lots of different dishes and also other little nods to the fact that they’re a vineyard.

A winery first,
with food supporting that.

While the majority of chefs might pair a wine with a specific dish, the Contentious Chef works the other way around, preparing dishes that can be paired with the wines available at the vineyard.

Wine is an exclusive ingredient in many of the offerings on the menu. The duck liver pate for instance is made with a bit of port from the cellar and made in-house by the Contentious Character team. But that’s not all.

They’ve got stuffed vine leaves as an entrée. A new idea this season. As soon as young leaves out there on the vines sprout, they go out and pick a couple of thousand leaves and brine them to roll their own vine leaves.

The new Summer menu at Contentious Character is an almost love-letter to great Australian ingredients and wines, adding an authentic twist much like the name itself.

With Parliament also being iconic to Canberra, Contentious Character owners Ross, Tony, Ben, and Jeremy considered the capital to be the home of debate. Politics has become a tiresome topic so it’s nice to put it behind you when you come in and debate wine and food instead. Everyone has an opinion on wine and there’s not necessarily right or wrong. It’s always contentious.

It may also be contentious deciding what to order from the new ‘slightly more plant-based’ and with ‘more house-made ingredients’ summer menu.

While meat-eaters will be lured by the crowd favourite, stuffed and wood-fired free-range pork belly, vegetarians can opt for the cauliflower risotto which looks simple on the outside but is bursting with tang on the inside.

For those simply looking to do the 15 wine tasting experience of old and new world wines, during the week, you can snack on the cheese and house made charcuterie platter.

While the menu is in itself impeccable, Contentious Character is open and welcoming to people with special dietary requirements, including providing gluten-free and vegan options.

Having recently won the Best New Business Start-Up Award in the Queanbeyan Palerang Business Excellence Awards and also working on growing their own produce, this isn’t the last you’ll hear of this boutique local vineyard, making a name in the region.

Contentious Character is open for tastings and platters
Wednesday–Friday from 10am to 5pm,
for dinner on Friday from 5pm–9pm
with a special weekly seasonal-based menu that includes pizza and pasta, and for weekend lunches.

To book your experience at this enticing winery and eatery visit the website.