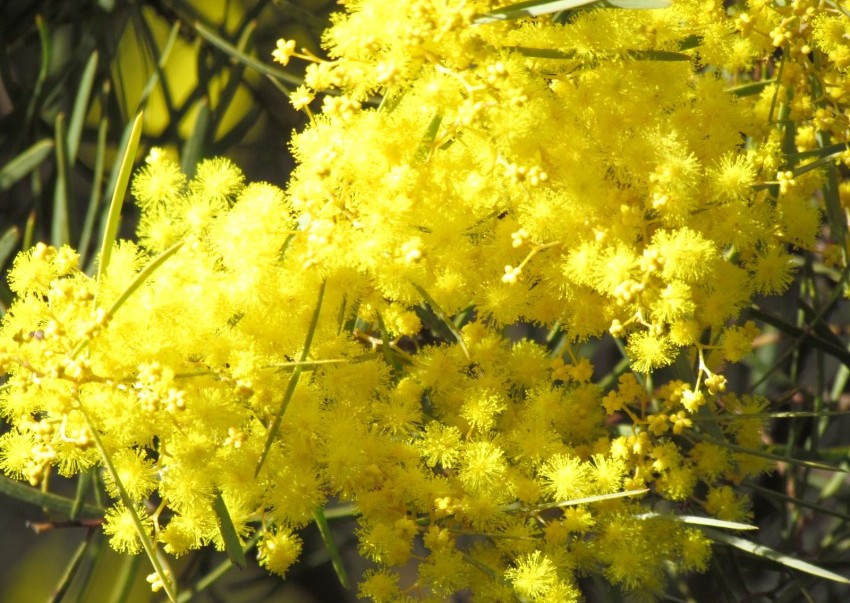 By Jo Walker.
DISPLAYS OF GOLDEN, lemon or cream flowers make wattles colourful additions to gardens as bushy background plants.   Because they are nitrogen-fixing plants they are also ideal as understorey in shelter-belts.   As well as having attractive flowers, different species of wattles have a variety of leaf colours – dark or bright green, greyish green or even light purple – and are useful as contrast plants in the garden.
Several of our local species are just beginning to flower, with the most noticeable in this part of the world being the ubiquitous Silver Wattle (Acacia dealbata) named for its silver-green leaves.   Because it does best in moist soils, many trees have died locally during the drought. Acacia genistifolia is a thorny-leaved species which is bearing a profusion of cream flowers right now. Another pale flowered wattle blooming at present is the tiny Ploughshare Wattle (A. gunnii) which gets its name from the small triangular leaves. This one is not very noticeable as it only grows to about 30cm and is often hidden amongst tussocks and heath plants.

A. rubida (Red-stem Wattle) is just beginning to show its lemon flowers in sheltered places.   Although it does grow sometimes on rocky hillsides, it seems to develop into a taller and more robust plant near creeks and gullies.   It gets its name from the reddish stems and its new growth which is a striking orange-red against the light.Three local wattles that definitely tolerate dry conditions are A. buxifolia (Boxleaf Wattle), A. dawsonii (Poverty Wattle) and A. parramattensis (Sydney Green Wattle), all of which grow on the dry slopes of the Queanbeyan escarpment.   The first two grow into neat, if sometimes spindly, bushes with yellow flowers..   A. parramattensis, with bright green bipinnate leaves and cream flowers is a taller shrub and often suckers to form a colony of plants.All of the above are spring flowering species – the following two flower much later.   A. mearnsii (Black Wattle) flowers in November bearing masses of cream heavily-scented flowers.   A. implexa (Lightwood) grows to tree-like proportions (although often slowly) and also has cream flowers.   It is a similar tree to A. melanoxylon (Blackwood Wattle), and, like that species, has dense attractive wood suitable for woodworking.

There are several hundred species of wattle to pick from but these are just a few of the non-local species worth growing:

Wattles are easily propagated by seed collected when the pods open.   Treat with just-boiled water.   When seeds have begun to swell they are ready for planting.